The History of the Church and Manor of Wigan 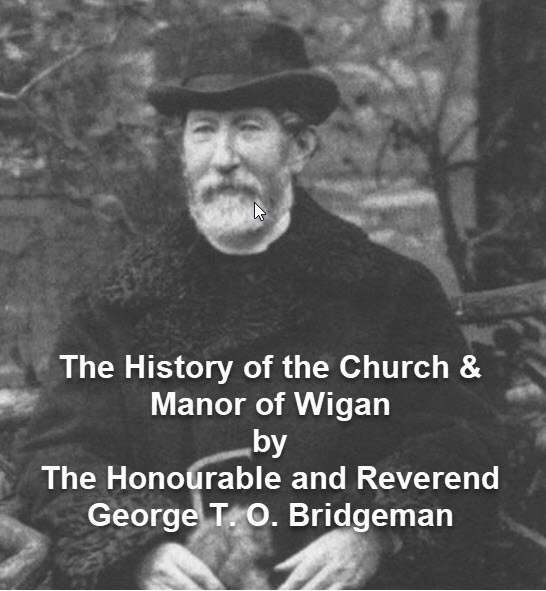 Thanks to Ron Hunt of "wiganworld fame" for the volumes and the rare photograph.

The Rev. the Hon. George Thomas Orlando Bridgeman died at Wigan yesterday morning, having been seized with paralysis on Saturday night. Canon Bridgeman, who was the second son of the second Earl of Bradford, was born in 1823. He was educated at Harrow, and Trinity College, Cambridge, where he took his M.A. degree in 1845. Four years later he was ordained deacon in the diocese of Rochester, and priest in the diocese of Hereford in 1850. He was rector of Willey, Shropshire, from 1850 to 1853, and of Blymhill, Staffordshire, from 1853 to 1864. He was rural dean of Brewood from 1863 to 1864. In 1864 Canon Bridgeman was preferred to the rectory of Wigan, in the patronage of Lord Bradford, which he held till his death. He was appointed chaplain in ordinary to the Queen in 1872 and rural dean of Wigan in the following year. He was an hon. canon of Chester from 1872 to 1880, when he became hon. canon of Liverpool. He published in 1889 a "History of the Church and Manor of Wigan." He married, in 1850, Emily Mary, daughter of the late Dr. Baget, Bishop of Bath and Wells (she died in 1853). Canon Bridgeman took an active part in Church and school extension, and his death is much regretted. He was a J.P. for Staffordshire and Shropshire.