The Diary of Roger Lowe 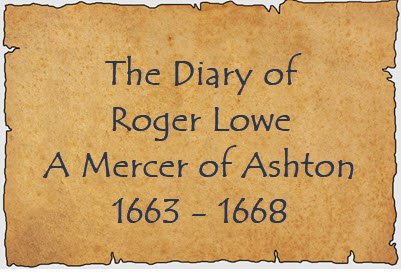 THE Diary of Roger Lowe is preserved in the Leyland Free Library and Museum, in Hindley, Lancashire. Extracts first appeared in the “Local Gleanings” columns of The Manchester Courier, beginning on April 21, 1876, and were reprinted in the first volume of Local Gleanings Relating to Lancashire and Cheshire, edited by J. P. Earwaker. In the autumn of 1876 the diary was printed in the antiquarian columns entitled the “Chronicle Scrap Book” in The Leigh Chronicle, of Leigh, Lancashire.

The following year it was reprinted, with a brief introduction and notes, by the Chronicle, as a separate publication. This edition omitted a number of passages, however, which have been included here.

I wish to thank Mr. Herbert H. Smith, Librarian and Secretary of the Leyland Free Library and Museum, and his Committee, for their permission to publish the diary; Professor Wallace Notestein, of Yale University, for introducing me to Roger Lowe; and Mr. John Espey, of Merton College, Oxford, for a memorable trip to Lancashire and eyes quick to detect the editor’s errors.