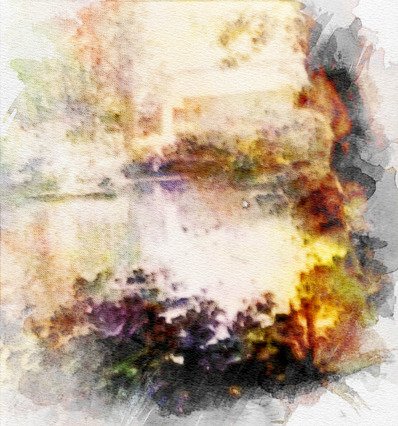 Winstanley Hall, a fine Elizabethan stone hall, was built in Winstanley Park by Thomas Winstanley and his wife, Elizabeth, around 1560. Prior to that time the Winstanleys occupied a moated wooden homestead a short distance northwest of the hall. This document provides information on this moated homestead and another moated homestead in Blackley Hurst, a detached part of Winstanley in Billinge, now Merseyside.

The name Winstanley is defined by Ekwall in the Concise English Dictionary of English Place Names1 as an Old English name meaning Wynstan’s Leah – a wood or clearing. Old English was the language spoken in England from roughly 500 to 1100. The Anglo-Saxons were a cultural group who inhabited England in the Early Middle Ages. They traced their origins to settlers who came to Britain from mainland Europe in the 5th century. Anglo-Saxon identity arose from interaction between incoming groups from several Germanic tribes, both amongst themselves and with indigenous Britons, such as the Brigantes.

Edmund Winstanley, the son of Thomas and Elizabeth, sold Winstanley Hall and Estate to James Bankes in 15964, and they remained with the Bankes family until 2000, when the hall was sold to Dobcrest. 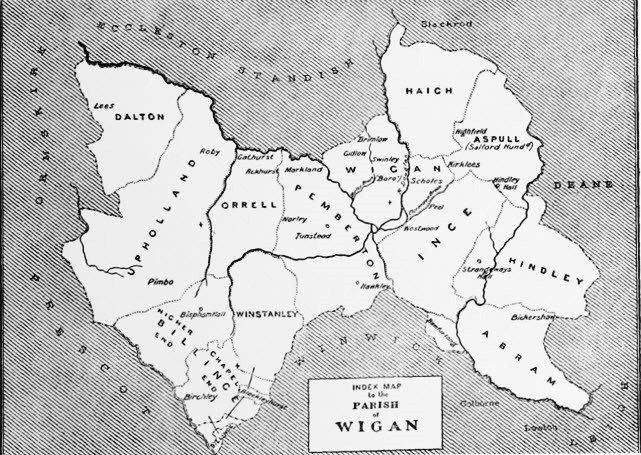 The gentle eastern slopes of Billinge Hill are incised by a number of small tributary streams of the river Douglas, creating a well-drained and fairly undulating landscape. Winstanley Park sits within this landscape; the maximum altitude of the park being about 330 feet at Camp Hill in the south-west and the minimum about 160 feet at Pony Dick to the east. The line of the Tinker Hole Fault runs from southwest to northeast across the central part of the park with a throw of up to 355 feet to the southeast. To the east of the fault the coal measures are not obscured by drift deposits; whilst to the west of the fault there is superficial cover of glacial boulder clays, which underlies most of the northern half of the park, including the moated area and the Mossey Croft Wood area.

Figure 2 shows a recent satellite photo of Winstanley Park. The old moat is on the northside of the Moat House with gardens to the south. The walled gardens were constructed in the late 18th century7. A dark line crosses from southwest to north east between the Winstanley Hall and moat. The M6 is to the west. Lea Wood is the line of trees to the east of the hall and Pony Dick is on the east side. Winstanley Park occupies almost a third of the whole area of Winstanley Township. 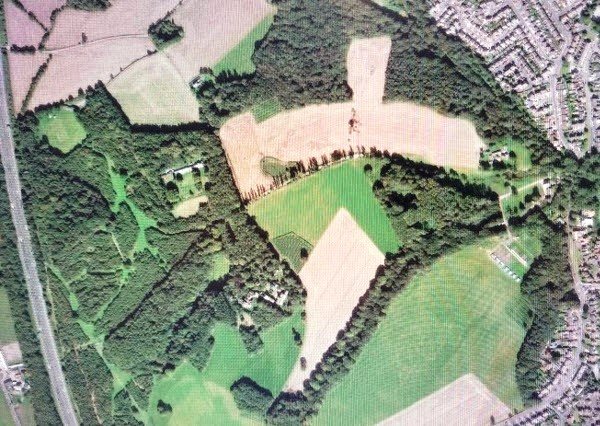 Fig 2 - Satellite photograh of Winstanley Park The moat comprises part of a Scheduled Ancient Monument (SM 22481/01)7, along with a group of fishponds (SM 22481102) located about 600 feet to the northeast in Workshop Wood. The moated site includes a rectangular island measuring about 150 feet by 120 feet and is surrounded on three sides by a waterlogged moat up to 45 feet wide and 3 feet deep to the water level. The moat's southern arm is dry and has been partially infilled. There is an inlet channel at the moat's north-western corner and an outlet channel at the north-eastern corner.

Flanking the waterlogged moat is an outer bank up to 30 feet wide and 3 feet high.
Access to the island is by a causeway on the western arm. Despite some disturbance to the island by tree roots and partial cleaning and infilling of the moat, Winstanley moated survives well. Evidence of the original buildings will exist upon the island5.

A walled garden was constructed to the south of the moat in the late 18th century. The garden is not shown on the estate plan of 17708 (Figure 3) and the earliest evidence for its existence is the estate plan of 1792. The west, north and east sides of the garden had high brick walls, but a ha-ha forms the southern boundary.  An example of a ha-ha is shown in Figure 4. A possible precursor for the walled garden may have existed within the moated site, where cartographic evidence has suggested that a garden may have existed within the post-medieval period. Such a scenario would help to explain why the walled garden is located in such close proximity to the medieval moated site. 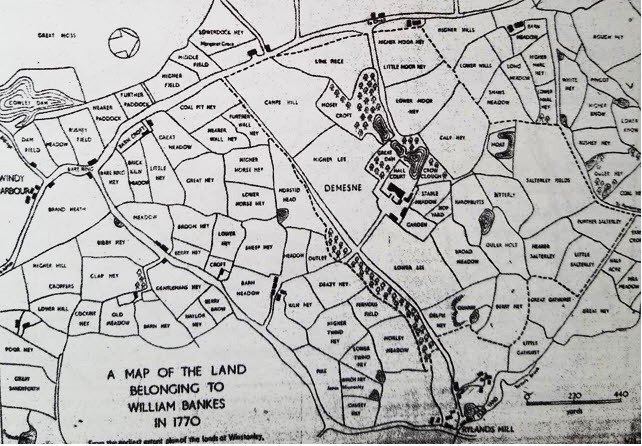 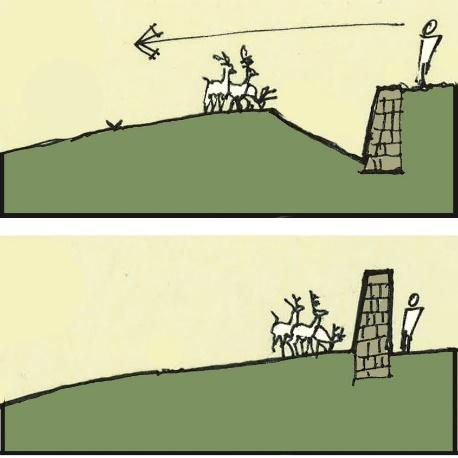 Fig 4. -Comparison of a ha-ha (top) and a regular wall (bottom)
Both walls prevent access, but the ha-ha does not block the view.

Figure 5 shows a 1980 photograph of the north side of the moat and a recent photo of the moat taken from within Moat House.

Figure 6 shows part of the Domesday Map of 1086. Winstanley is marked; Billinge and Wigan are not. The accompanying text states that “Wulfbert held “Wibaldeslei. There are 2 carucates of land. It is worth 64d” 10. Two caractures of land were about 240 acres. Wulfbert was probably tenant in chief over, or lord of the manor, under Roger de Poitou who was given much of the land between the River Mersey and River Ribble by King William after the Conquest of 1066. As Wulfbert is an Old English name, it is likely that a Winstanley settlement existed in Early Medieval times. The name Wulfbert was rarely used after the Conquest and the names of heads of the Winstanley family then included Roger, James, Edmund and Thomas. Joyce Bankes4 reports that the Winstanleys of Winstanley lived in their “Homestead Moat” adjacent to the old Pack Horse Salt Way.

Wood clearance increased during the Bronze Age (2400-750BC) to its probable height in the early Iron Age. About half of England had ceased to be wildwood by 500BC. In 1086 only about 15 percent of England was woodland or wood-pasture12.

Fragments of natural remnants of woodlands occur on quite inaccessible steep slopes. Lea Wood, Mossey Croft Wood and Blundell’s Wood along Smithy Brook eastwards from Pony Dick probably originated as such fragments. although the vegetation undoubtedly has changed over time. 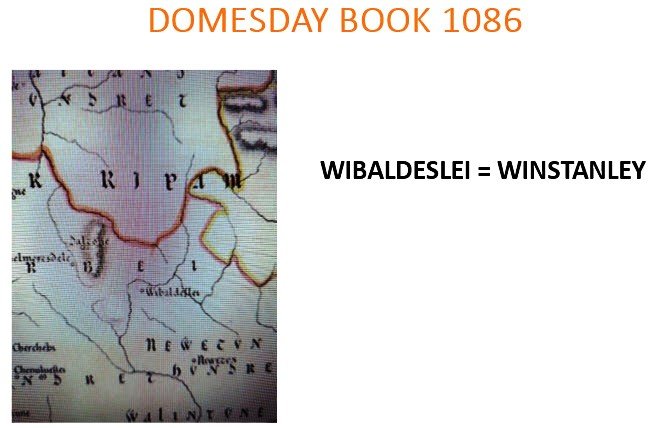 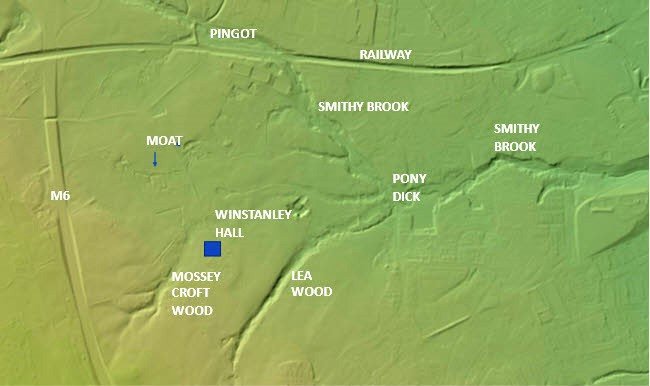 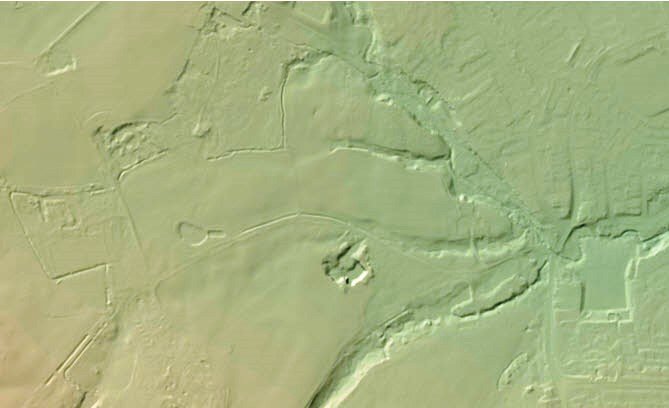 Key features of the LIDAR maps are as follows:

I now look at early plans and maps to investigate if the above LIDAR features can be further interpreted.

The 1770 map (Figure 3) shows two main roads or pathways to Winstanley Hall: one from the old road from Windy Arbour to Orrell and Upholland, before Winstanley Road and the M6 were built, running along the west side of Mossey Croft Wood; the other from Pony Dick along the side of Lea Wood. A building or buildings are shown where the Mossey Croft Road joins old Winstanley Road. Three water bodies are shown in Mossey Croft Wood. A three-sided moat is shown with a small pond within the east side of the moated mound. Salterly Fields are evident to the northeast of the moat. In the 16th century the brook dividing Winstanley from Orrell (Smithy Brook) was known as Salters Brook.

The 1792 and 1820 estate plans7 show a four-sided moat and a garden to the south. The 1838 tithe plan shows a four-sided moat with a small entrance through the south side. Figure 913 shows the map of Winstanley Park that highlights the outcrop of the Orrell 5ft and 4ft coal seams. The post-1770 road from Pony Dick to the hall joins the road from the old Winstanley Road past the north side of Mossey Croft Wood and this continues northward past the southeast corner of the moat gardens to join the more northerly road from the old Winstanley Road that continues eastward to Pemberton across the Pingot. 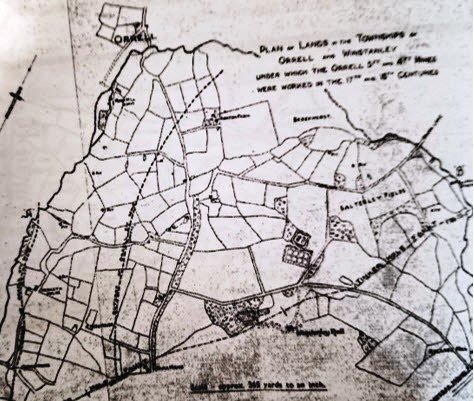 The 1849 OS map (Figure 10) shows the following points of interest:

Fig 10 - 1849 OS Map Winstanley Park (Tinker Hole faultline added) On the 1894 OS map (not shown) sluices are indicated at the northern end of both water bodies in Mossey Croft Wood.

The 1929 OS map (Figure 11) more clearly shows the contours of the land. The elevation generally decreases from about 350 feet west of Mossey Croft Wood to about 250 feet at the moat.  The moat is located at the foot of the slope where the land flattens out. The elevation of the north water body in Mossey Croft Wood is lower than the south water body. The 275 feet contour northwest of the north water body shows a W configuration, indicating two cuts either side of a raised higher platform. The 300 ft contour o the west of Mossey Croft Wood does not show such configuration. Along the southern side of the gardens and the northwest corner of the moat the contours indicate cuts. A stream flows into the northwest corner of the moat and a stream at slightly lower elevation flows eastward out of the northeastern corner of the moat.

The moat is not located close to any other significant surface flow of water, such as Smithy Brook or the stream through Lea Wood.

Figure 12 shows the moat around Blackley Hurst Hall, south of Newton Road in Blackley Hurst, a detached part of Winstanley in Billinge built prior to 1533. 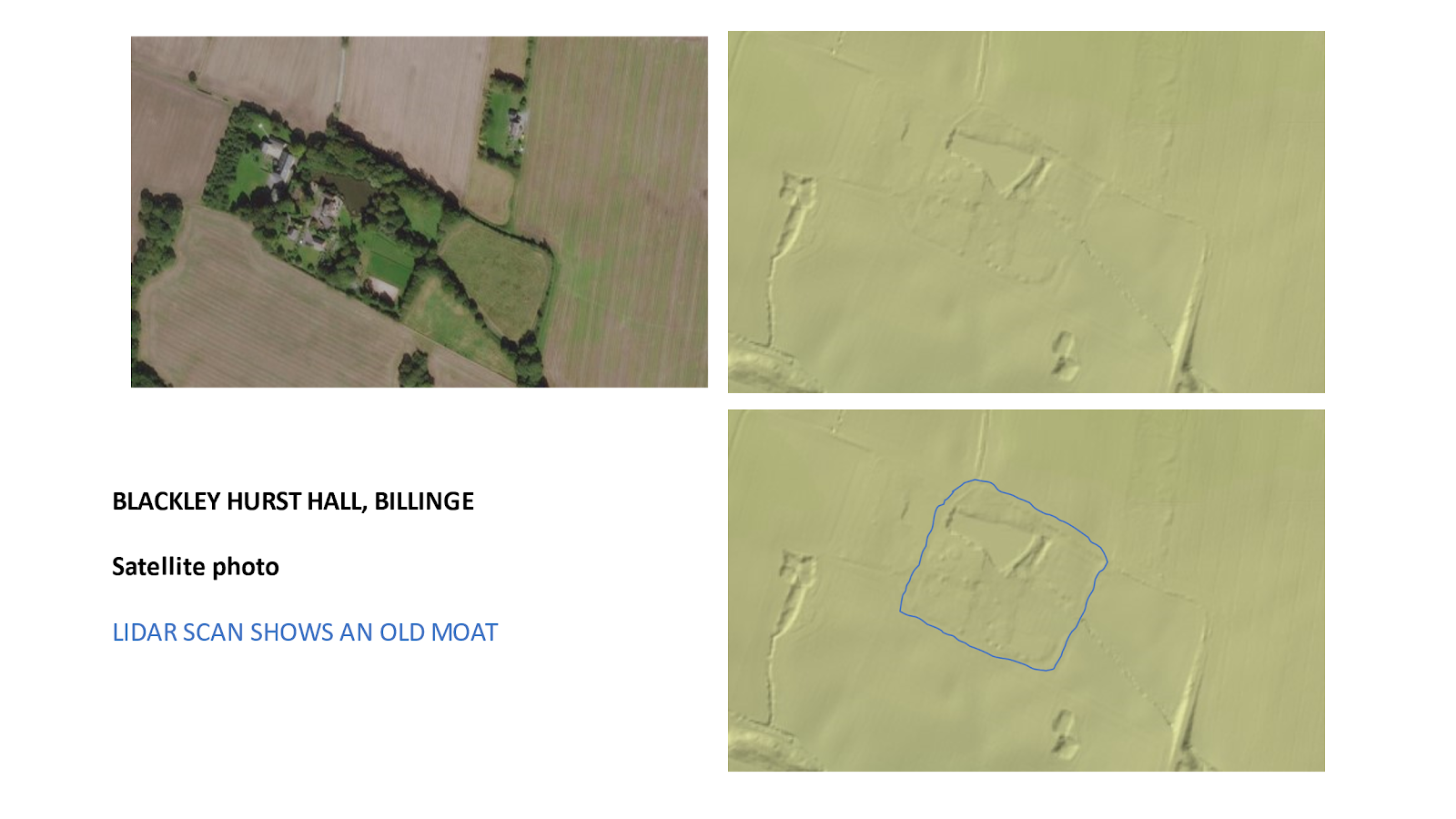 Lidar stands for Light Detection and Ranging and is a remote sensing method that uses light in the form of a pulsed laser to measure ranges (variable distances) to the Earth. These light pulses—combined with other data recorded by the airborne system — generate precise, three-dimensional information about the shape of the Earth and its surface characteristics.

A lidar instrument principally consists of a laser, a scanner, and a specialized GPS receiver. Airplanes and helicopters are the most commonly used platforms for acquiring lidar data over broad areas. Lidar can penetrate through buildings and vegetation to reveal the underlying surface of the earth including ditches, embankments and streams.

Lidar maps are available at arc.gis.com. 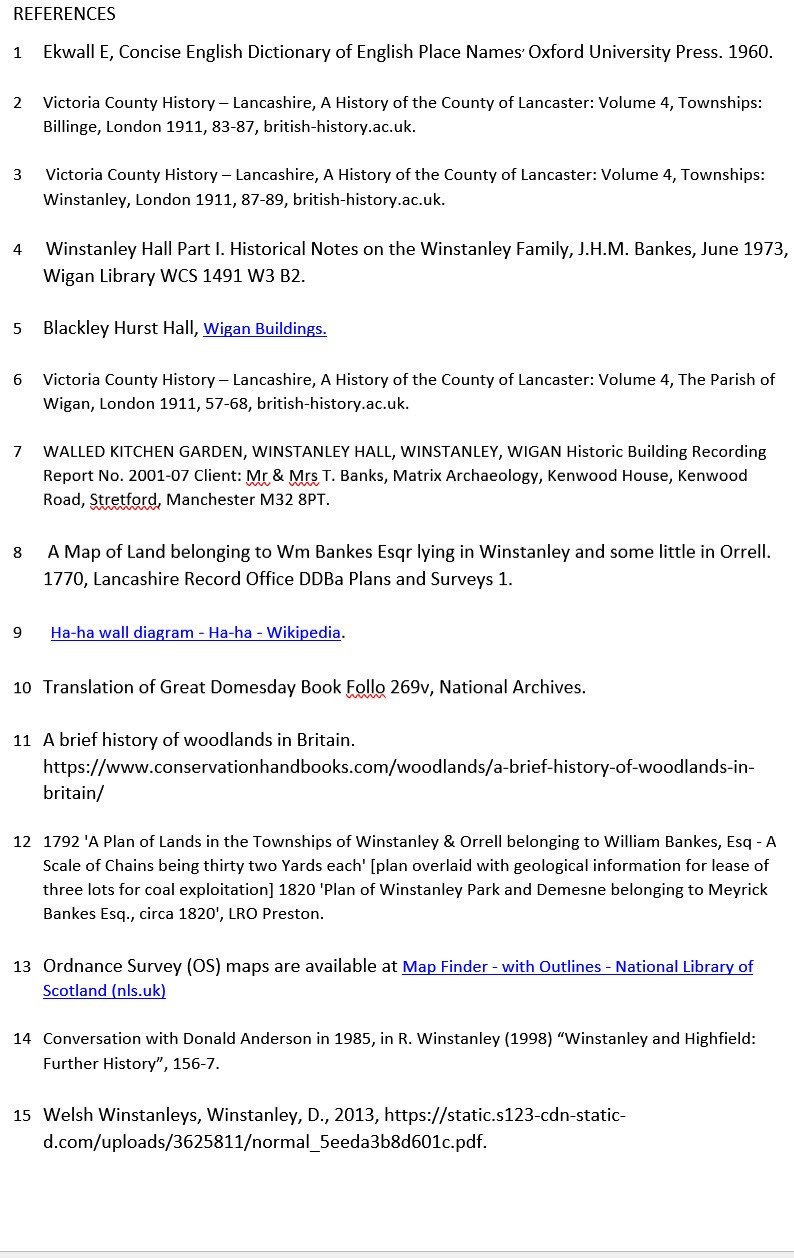