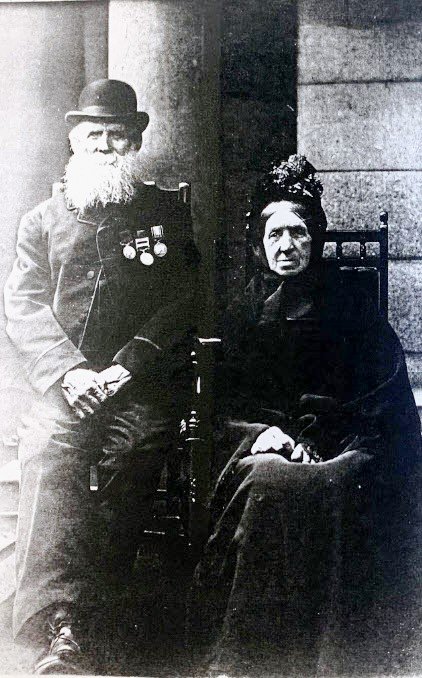 Whilst researching the history of the Plantation Gates and their occupants, came across the obituary of James Higson one of the old and celebrated gatekeepers. The standard of Victorian journalism was exemplary and far outweighs the modern version. It is for this reason that  the original text has been produced in its entirety, with the benefit of modern technology various images have been inserted to complement the work of the unknown journalist.

DEATH OF AN OLD SOLDIER. A REMARKABLE CAREER.

James Higson, the old lodge-keeper for the Wigan entrance to Haigh Park, had a remarkable career as a private soldier, and his recent death gives us occasion for recalling some of the particulars of what in many respects was an interesting life.

The figure of the old lodge-keeper has been familiar not only to the frequenters of the plantation grounds of Haigh Hall, but to the passers-by in Wigan Lane, for a quarter of a century, that being the period during which the veteran has kept his post at the gates, in the service of the Crawford family, and many will remember seeing the old gentleman at the lodge decorated with the insignia of honourable service, and in all the glory of badge and medal.

James Higson was born at Blackrod on the 20th December, 1821. The Higson’s were an old stock, and were well known for generations of  bell-ringers at the Blackrod Parish Church. It was here that James lived, and passed the years of his youth, until on the 7th of June, 1842, he enlisted at Manchester, in the 1st Battalion of the Queen's Royal Regiment, which at the present time is known as the West Surrey.

He was not to enjoy soldier life at home for long, his regiment being ordered out on foreign service, and on the 3rd September of the same year, he embarked at Gravesend for the East Indies, and henceforth it was his lot to play an active part as a private soldier in the making of English history in the Greater Britain across the seas, during his long service abroad.

He served in the East Indies from the 10th January, 1843, to 17th September, 1845, and was present at and engaged in the storm and capture of Panella and Panngbur in the Southern Mahrrattas on the 1st December, 1844, and at the investment and capture of the forts of Monahan and Monsontosh in January, 1845. He was engaged in the Kaffir War of 1851-2-3, and was stationed at the Cape of Good Hope from the 14th August, 1851 until he embarked for China on the 13th of March, 1860.

He served in the North and South of China from 11th May, 1860, to 22nd January, 1861, and passed through the China War of 1860, being present at the operations on the 12th and 14th of August and the 21st of September, and at the advance on Pekin on the 6th October, 1860. During this long period of active foreign service Higson several times distinguished himself. He received a medal in recognition of his service in the Kaffir War of 1851-2-3, and was decorated with a medal and two clasps, bearing the inscriptions' Pekin, 1860' and Taku Forts, 1860.

Besides these tokens of honour he was presented with the good conduct medal, which bears the inscription, For long service and good conduct," and carries with it a gratuity of £5. Higson was discharged from the army on the 15th of June, 1863, at Devonport, in consequence of  him having completed his 21 years of service for his Queen and country, and, as his certificate bears witness, was free to a pension. 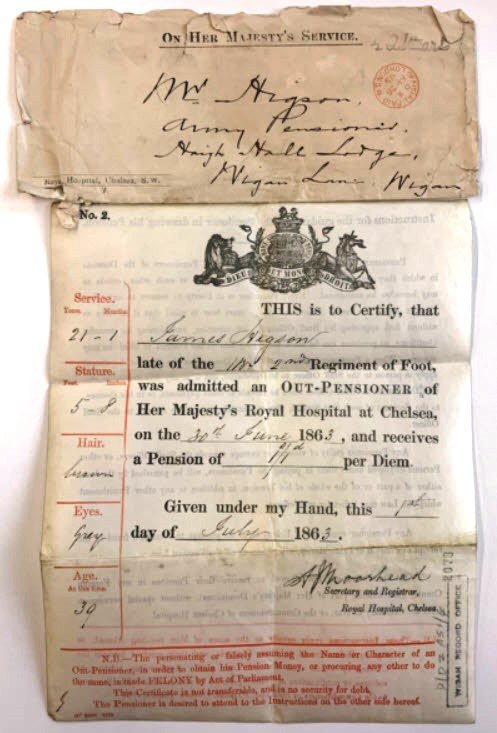 On his discharge he carried with him a bundle of documents bearing testimony to his excellent character from all his commanding officers, and his character and conduct, as reported. by the Regimental Board, at the time, is given on his parchment certificate, which is signed by the colonel in command, which the certificate says his conduct has been exemplary. He is in possession of five good conduct badges, and of the good conduct medal, with gratuity. Another testimonial as to his character, given him by Captain Tucker, says that Higson had always been perfectly sober, honest, and trustworthy." His conduct throughout the whole of his 21 years of service had been exemplary, and that he carried with him the good opinion of every officer of his regiment. 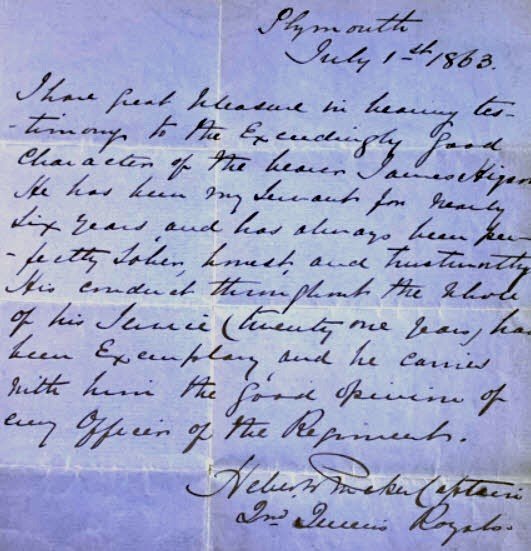 One of the Testimonials to James

Higson was a married man. During his early soldier days he had met a young girl, Elizabeth Andrews, of Heytesbury, near Bath, in the South of England, who was destined to play a prominent part in his after life. 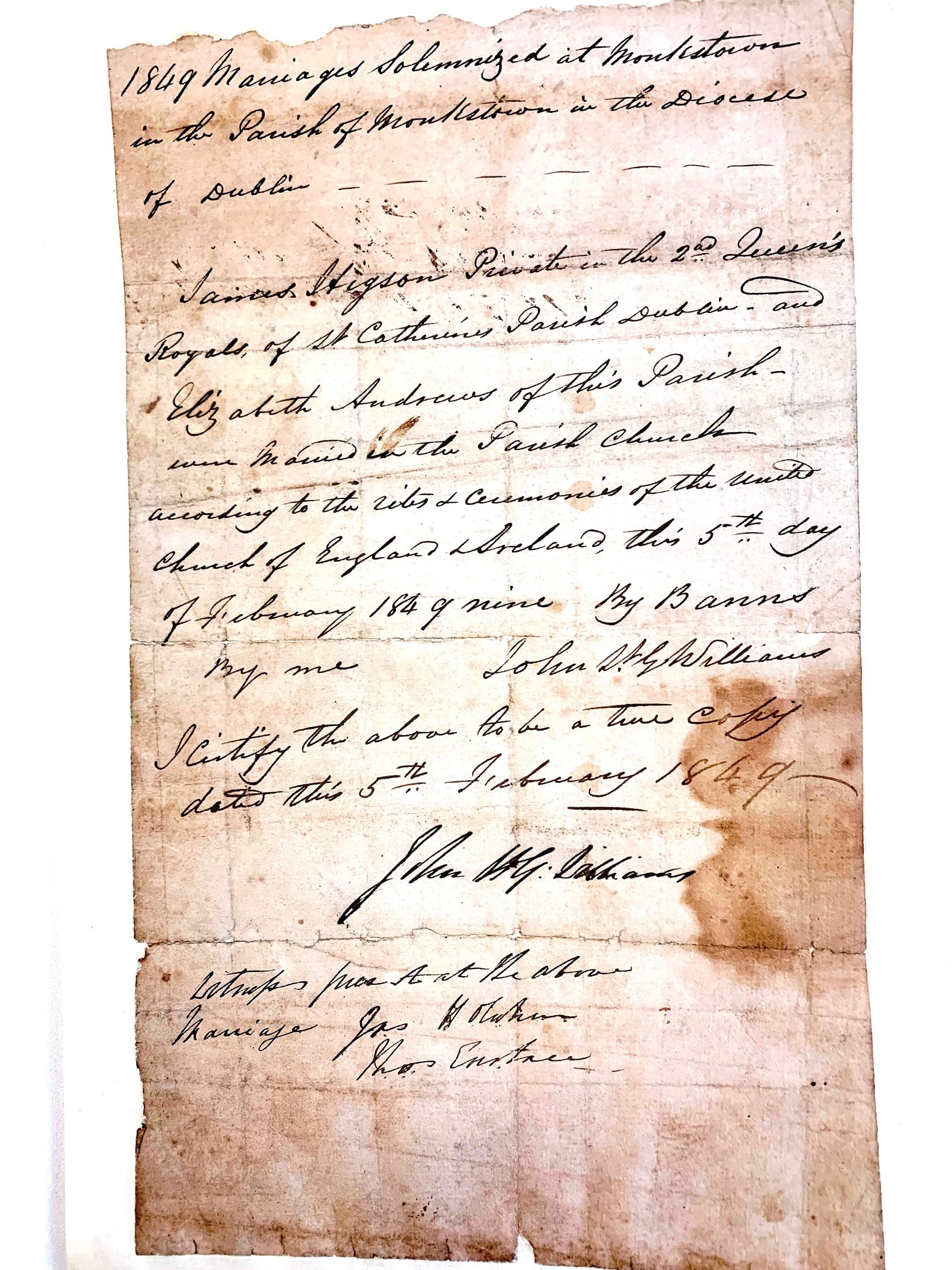 He fell in love with her, and his love proved true, for happening to be in the old country in the year 1849, be sent for her, and they were married in Dublin on the 5th of February, 1849, and she proved herself a worthy soldier's wife, for, during all the years of active service in foreign lands, she marched at her husband's side.

After Higson's discharge from the army, he and his wife migrated to the place of birth, Blackrod, and soon afterwards they came to Wigan, in the service of the Crawford family, and here they have lived ever since. Higson came to the Crawford estate in April, 1864, acting first in the capacity of watchman at the Hall, and afterwards an coachman to Mr. Wood, the agent for the estate, then he passed a year in the gardens, after which he went to the Wigan Lane Lodge, where he remained as the keeper for a period of nearly 25 years.

During his long service of 34 years on the Haigh Estate, he has seen four generations of the Crawfords, having done service for three Earls, and opened the gates for two. 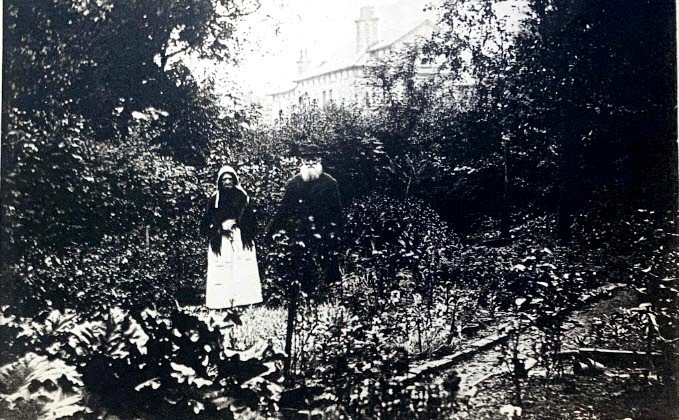 James and Elizabeth in their garden, The building in the background is probably The Hollies, now demolished.

Mr. and Mrs. Higson were in the year of jubilee of their wedded life, and, had the old solider lived, they would have celebrated their golden wedding on the 5th of next February. Fifteen of the fifty years had been spent together in the army, and the couple were in the forty-fifth in their service to the Crawfords. "There are not many," as the venerable widow of the old soldier said to our representative in an interview, "who travel the world over, in the service of their Queen and country, who come back to lie in their own graveyard." "He was dearly liked in the army, and he was dearly liked out of it," said Mrs. Higson. "He never gave me an angry word in his life. He neve drank, and never kept a penny from me. He was a good kind man, and a better never was born. W have lived together all these years in Wigan Lane, and I don't think we have made one enemy either among the rich or among the poor." That is an appreciation from the one who best knew the old soldier, and, when the last word is said, there is nothing that anyone may add, in eulogy, to what has already been said.

One of our volunteers, Caroline Heaven, has fully researched James and his family. The article has been submitted to Wigan Archives for inclusion in the PastForward publication. The article will be included in the future on Haigh Hall History page,

The opening of the Whelley Gates in 1873 may have reduced the need for a gatekeeper, but the lodges were home to several workers on the estate.

1901 - William and Sarah Renshaw, born in Chester. William was a gardener on the Haigh Estate. 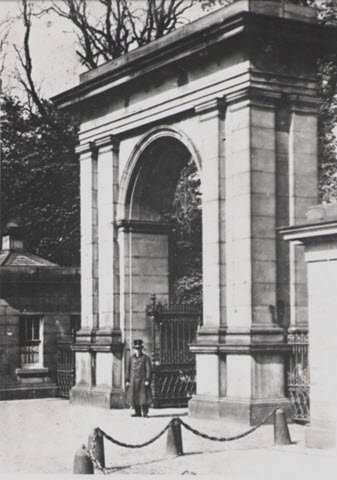 Another image of one of the gatekeepers after James