George Lyon "a highwayman without a horse"..... 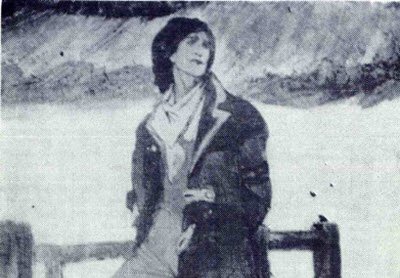 GEORGE LYON, HIGHWAYMAN WITHOUT A HORSE

GEORGE LYON was born in Up Holland in 1761. His body was buried in the village churchyard in 1815. He received little or no education. He spent his early life as a labourer and later he became a fully qualified handloom weaver. Why is it that practically every person in the Wigan area knows something about Lyon? Why is it that people still visit the churchyard at Up Holland to see his grave? The answer lies in Lyon's spare-time activities. Some writers have built up a romantic legend describing George Lyon as a highwayman: the resultant picture is of a horseman haunting the highways of the Wigan area, robbing the rich who rode in stage coaches in order to give to the poor of Up Holland. The writer believes that this view of Lyon is false, and the 150th anniversary of Lyon’s death seems an appropriate time to attempt to put the record straight.

As early as March 1786, when Lyon was 25, we find him at the Lancaster Assizes. Described as a labourer, he was accused of robbery with violence. Lyon was found guilty of "feloniously apaueling Robert Smith in the King's Highway at the Parish of Wigan and robbing him of Sixteen Shillings his Property".

Here lies the seed from which sprang the highly coloured legend of George Lyon as a highwayman. In recorded conversation later, Lyon declared that the sum involved was 95 guineas, and that he had shielded his accomplices. At any rate, Lyon was found guilty and sentenced to death by hanging. The Manchester Mercury of 11 April 1786 says: "On Thursday the Assizes ended at Lancaster on the Crown side, when . . . George Lyon, for robbing Robert Smith, at Winstanley . . . [was] capitally convicted, and received Sentence of Death . . ." He was reprieved, however, and pardoned, on condition that he be "transported for 7 years".

Acts passed during the reign of George II required those responsible for transporting criminals to enter into a formal contract. It has proved impossible to trace Lyon in the Home Office lists of persons transported, but it is probable that he spent his seven years in Africa. (Lyon himself declared at the time of his later trial that he had been transported see below.)

If Lyon served his full sentence, his return to England coincided with the outbreak of the French wars (1793). George settled down to master the art of weaving (at Lyon's trial in 1815, Luke Bradshaw declared that he had been apprenticed to George Lyon for nearly ten years), but he was far from being a reformed character: thus in a letter written by Ellen Weeton to Mrs. Whitehead and dated 23 May 1809 she says: "In two houses near together [in Up Holland] there have been in each, a mother and daughter lying-in, nearly at the same time; and one man (the notorious George Lyon) reputed to be father of all four."

The Lancaster Gazette mentions eleven indictments against Lyon but he was tried and convicted on two of them, i.e. robbing Fogg and Walmesley.

An eye-witness account of the trial printed in Wigan in 1815 and to be seen in Wigan Archives gives full details of the gang's last job, which must be regarded as typical.

On 6 August 1814, Charles Walmesley and his family left their home Westwood House at Ince-in-Makerfield, near Wigan, to spend a week at North Meols, near Southport. A young man named Edward Ford, who knew the servants, provided George Lyon with information. Ford joined Bennett, Houghton and Lyon at the latter's house in Up Holland to plan a burglary.

On the agreed night Ford and Houghton set off at 7 p.m. On their way they called at the Hare and Hounds in Pemberton. There they had a drink and something to eat. Whilst there they stole a pair of "quarter boots", the property of the landlord's son. Then the two set off to meet Lyon and Bennett, as arranged, at Parson Meadow Bridge, half a mile from Westwood House.

They approached the house and hid in the shrubbery until the servants retired to bed. At 1 a.m. all the lights were out in the house. Lyon checked his equipment four pistols loaded with powder and ball, two or three bludgeons, skeleton keys, two iron "rooks" (i.e. small iron crow-bars), and two or three picklocks. Two ladders were borrowed from the barn and tied together. After some difficulty, the robbers succeeded in making an entry to the drawing-room by breaking a catch on the window.

Bennett searched and put valuables into his handkerchief. Houghton held a lantern. Ford pocketed three half-crowns. Meanwhile, Lyon performed the lowly task of keeping watch not in itself a role in keeping with the romantic legend. (It is interesting, also, to note that the thieves walked from Up Holland to Ince and back a distance of some ten miles: if they had possessed horses, they might have been expected to use them on the job. We must assume that Lyon and his companions did not own horses, and the picture of Lyon as a velvet-clad highwayman riding a black horse and stopping stage coaches with the cry of "stand and deliver" becomes unconvincing.) Ford refused to break into a second room at Westwood House, claiming that the servants knew him and that they would easily recognise him if they came down. Lyon raved at him, told him to black his face with the soot he carried in his pocket, and cursed his cowardice. Lyon and Bennett made the second entry. In the parlour cupboard they found, among other things, a silver tea caddy, which they proposed to store until they had completed their planned robbery of Wigan Parish Church. Then they would put all the silver together, making a worthwhile haul.

But there was trouble about the getaway. As they were walking towards Henhurst Bridge, Ford recognised Abraham Barrow and his son coming from the direction of Wigan. Every effort was made to conceal Ford. They crossed the road, put him behind them and all turned their heads away. At the trial the Barrows were able to say that they had seen four men acting suspiciously on the night of the robbery, and Lyon, Bennett, Houghton and Ford fitted the descriptions.

When he eventually got back to Up Holland, Lyon planted the stolen plate "in a midding stead" at the back of his house. According to the owner, the value of the stolen property amounted to £20.

By this time some crime usually robbery was being committed in the district every night by Lyon and his gang. It is no wonder then that Thomas Berry, the Up Holland village constable, was at the end of his tether. An application was made to Manchester* 3) for the loan of the famous "thief taker", John Macdonald, who had been employed in that capacity for seven years. He approached Up Holland in the guise of a hawker and pedlar, complete with yardstick and wallet. He made contact with Lyon and the two became quite friendly.

At the trial in 1815, John Baxter, landlord of the Bull's Head in Up Holland, told how his wife had bought some check cloth from Macdonald on Lyon's recommendation. The two had much in common. Both had been in trouble with the law and used "flash terms" (i.e. criminal language). They talked of Tom Morley who had been hanged for selling "scrieves" (forged bank notes). Eventually the conversation got round to goods that had been "prigg'd" (stolen).

Macdonald claimed that he, like Lyon, had been "lagged" (transported) and "quadded" (imprisoned). George Lyon began to boast of his reputation as "Head or Captain of the thieves" and mentioned his accomplices. When Lyon agreed to sell Macdonald some stolen silver plate Macdonald immediately reported to Constable Cooper at Wigan. Macdonald was given £20 in Bank of England notes fourteen £1 notes and three £2 notes. The dates and serial numbers were recorded and other private marks were added for purposes of identification. When Lyon appeared with 30-32ounces of plate (10 October 1814) Macdonald handed over the money. Lyon went home, whilst Constables Berry and Cooper, together with Macdonald, prepared to arrest him.

On visiting Lyon's house at nearly midnight, they discovered "another man and a woman were in bed, in the same room". Lyon was sitting on a bed. A thorough search of his house revealed a passage and a variety of articles a "phial of phosphorous", a lantern, skeleton keys and picklocks, a brace of pistols, a pair of eyeglasses and, eventually, nine banknotes whose serial numbers tallied with those issued by Cooper. The game was up.

Lyon had been well and truly tricked by the ingenious Macdonald. But he himself had contributed to his downfall by his lack of care and his boasting. It was the end, too, for Bennett and Houghton.

The trial of Lyon, Houghton and Bennett at Lancaster Assizes (beginning 23 April 1815) was a mere formality. The defence called neither witnesses nor anyone to speak on the robbers' behalf. Their true characters were well known. On the other hand, the prosecution had plenty of evidence and witnesses: most damning of all, Edward Ford turned King's Evidence and admitted having taken part in seventeen or eighteen jobs with the gang. (A year later Ford burgled a house at Wigan. At the Lancaster Assizes on 27 March 1817 he was found guilty of this crime and sentenced to death, but was pardoned.)  In face of the overwhelming evidence, all the defence counsel could do was to clutch at straws: for example, it was pointed out that Macdonald had a criminal record and mixed in undesirable company. However, the jury quickly reached its verdict. All three were declared guilty and sentenced to death. They were hanged at Lancaster on 22 April 1815.

Eventually the bodies of Lyon, Bennett and Houghton were given to their friends and were buried in the churchyard at Up Holland "amidst a concourse of several thousand spectators".

It is true that one Mr. Walker claimed that Lyon's body was buried in quicklime in Lancaster, but a Dr. Daglish recalled how, as a boy, he went to Lyon's funeral.

On reaching Orrell Post he saw large crowds moving in the direction of Gathurst. There they met the cart carrying Lyon's corpse. It had been driven all the way from Lancaster by Simon Washington, landlord of the Old Dog Inn in Up Holland. Washington declared afterwards that he would never undertake such a task in future for he swore that the devil had followed them throughout the long journey. The cart followed the canal and reached Up Holland via Roby Mill. In the churchyard there was a great clamour to get the best view; some even took to the rooftops.

Thus, ended George Lyon, "the highwayman of Up Holland" the "highwayman" without a horse, whose life hardly justified the romance woven around his name. But was it the end of George Lyon? This writer knows two people from Up Holland who claim that, one Saturday afternoon, they not only saw George Lyon in the churchyard but actually spoke to him!

I am much indebted to Mr. J. J. Bagley, who gave me the initial advice and guidance. My thanks, not only for their help but also for the patience with which they have located many obscure references for me, must go to the staffs of the Public Record Office, London; of the Lancaster Reference Library (in particular to Mr. E. H. Lowe, the City Librarian); of the Lancashire Record Office, Preston (in particular to the County Archivist, Mr. R. Sharpe France); of Wigan Reference Library (in particular to Mr. H. Arthur); and of the Liverpool Record Office. The portrait reputed to be of George Lyon, which appeared in the Skelmersdale Reporter, has been reproduced from a block kindly supplied by the directors of Lancashire Newspapers Ltd. 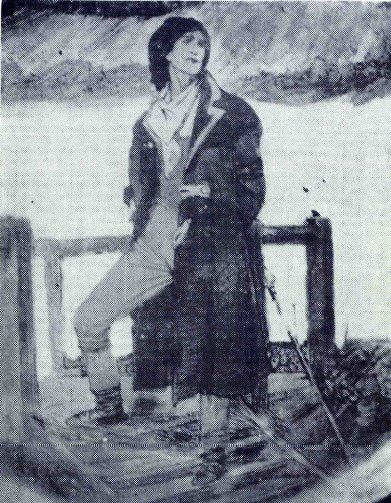 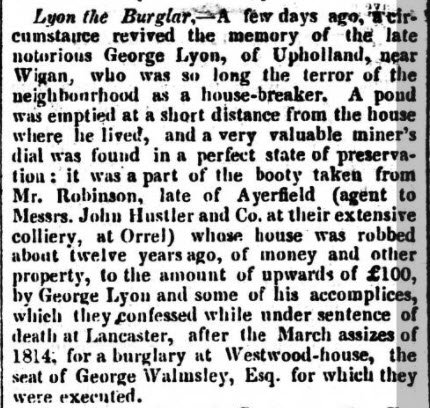