From Wigan to Wirral 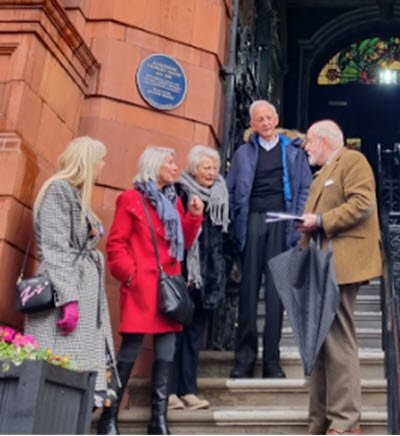 I wasn't sure how to start this article and I choose to use the headline above to start the story.

The topic isn't the easiest to address - the difference between funerals now and years gone by.

How I came to write this story starts with the headline. Late last year purely by chance in conversation it transpired that a chair that sits in a home on The Wirral started life in Wigan. 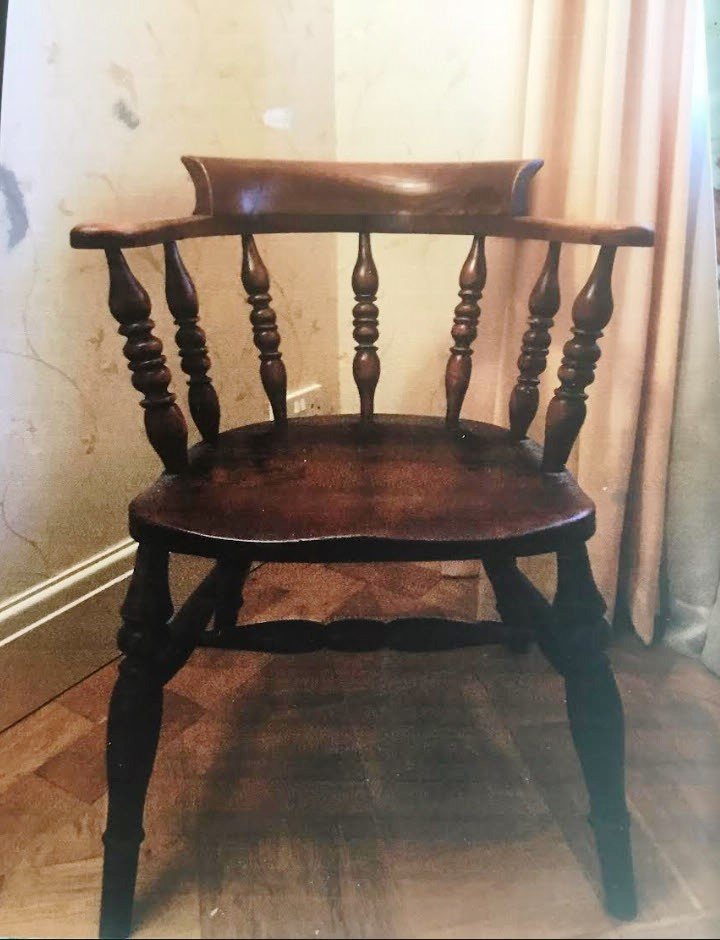 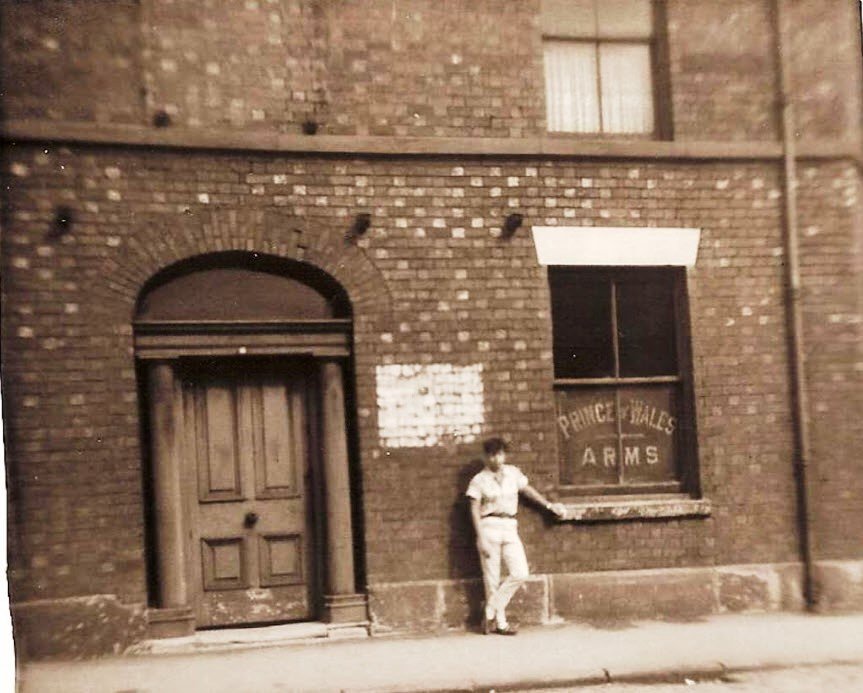 When the pub closed it went with the Licensees Mr, & Mrs Brett  to their new home in Yates Grove, Beech Hill, then to Hoylake on their passing it went to the home of their daughter Winifred and son-in-law Kevin also on the Wirral where it remains to this day.

The particular Burial Society (Union Street) was one of many in Wigan and in fact most towns throughout the country. A group would form, predominantly in working class localities  with the view to helping bereaved families of members of the society. A weekly payment would be paid for each person enrolled, on death a payment would be paid to help with funeral expenses.

In the  past most people from poorer families would be buried in unmarked graves, often called common graves or paupers graves; the very name would bring shame on a family ,and many would go without all their lives to be able to buy a grave . A story I heard more than once, a lady from Scholes  when her husband died she wanted to buy a grave so that in time she could be buried with him. The woman sold her wedding ring to help fund the purchase, from that day she wore a brass curtain ring in its stead; I also heard about families needing to borrow clothes for the funeral such was the grinding poverty during the 1930s .These things happened before I was born but I'm quite sure these stories typified the hardships people suffered during those dark days, felt especially at times of losing a loved one .

For the vast majority buying  a plot wasn't an option they had a job to keep body and soul together without fretting about funerals, this was where the local burial societies would come into their own and by and large they provided a great help in times of need .

The very title [Burial society] seems archaic today as the vast majority of funerals nowadays are cremations . Not so in the recent past , a fact the will surprise many - Wigan Crematorium was only opened  in 1955, converted from a old chapel.  Before that date cremations would have to travel Liverpool. In 1954 Bolton opened Overdale Crematorium I imagine people would opt for the shorter journey for that 12 month period.

The Roman Catholic Church only permitted cremations in May 1963 this lead to a vast  increase in  people choosing cremation . Other thing have altered greatly for instance before 1961 there were no Chapels of Rest in Wigan families would invariably have the coffin in their homes.

It may seem macabre to young people today but as late as the 1960s it was common practice .

This tradition was carried on in my family until quite recently along with other families, like mine,  descendants from The Irish Diaspora.  As a young man I remember attending traditional wakes, saying 'The Holy Rosary' at midnight ; it was a very emotional experience something that stays with you, although strangely not in a sad way; collective prayer seems to bring comfort in times of  sorrow . The mood during such nights was surprisingly light hearted ,taking about old times ;until the break of dawn when the atmosphere changed dramatically to one of anguish and sadness.

Many particularly from Irish backgrounds still prefer to have their loved ones at home at least for eve of the funeral . Speaking of Irish funerals , these days the reception after a funeral is often called ' A Wake ' this is really a misnomer, the original Irish wake originally meant a ‘watch’, ‘vigil’ or ‘guard’. It was used to refer to a prayer vigil, usually held late at night or overnight, where mourners would keep watch over their dead until the the morning .A wake often included prayers and the comforting of relatives, as well as a chance to see and pay respect to the person one last time.

Some wakes would also include sustenance and perhaps a tipple ,after the prayers were said . The clocks in the house would be stopped at the time of death, it was a sign of respect for the deceased. Most often, all mirrors would be turned around or covered. Candles would be lit and placed around the deceased The Holy Rosary would be said at midnight and most visitors would then leave. Those closest to the family would remain throughout the night. Although the exact reasons behind the traditional Irish wake may have been lost or clouded, the emotions involved have not changed much over the years. A wake is no longer about ensuring that the deceased does not revive, but instead about the healing process for family and friends left behind.

Other traditions  that have faded - drawing curtains of the house of the deceased, the curtains would be closed from the moment of death till after the funeral ,the rest of the street would do so on the day of the funeral; failing to do so would be considered a mark of disrespect.  Wireless and later television would never be turned off during the period of mourning ; it would be tantamount to sacrilege if a close member of the family went to 'the pictures' or God forbid 'a dance hall, !

I can remember vividly when a someone died in my parish two woman would be commandeered to collect from the neighbourhood they would say they were collecting for Mr. or Mrs. such a body .

They always used a handbag  they would open for donations and would turn their heads away so as not embarrass if some only had coppers they could spare. The wreath purchased would have a a ribbon saying 'From the Neighbours ' I don't think you would see that very often these days !

Back to 'The Chair ' (what tales it could tell) Kevin Kearns in whose home the chair now resides sent me a photograph and a copies of the accounts and the rule book, I'm greatly indebted to him for all his help. They make fascinating reading . In 1939 the account show a balance of £505-14-1 Incredibly over £34,000 in today's value. 'The Rule Book ' is even more interesting ,the society was founded in 1834 , the cover of the book contains 2 verses from scripture- ' Devout  men  carried Stephen to his burial '-Acts -viii ,v 2  and 'let all things be done decently and in order' -Cor xiv, v 6. These verses enshrine exactly why the society was founded .It would take page upon page to do justice to the contents. 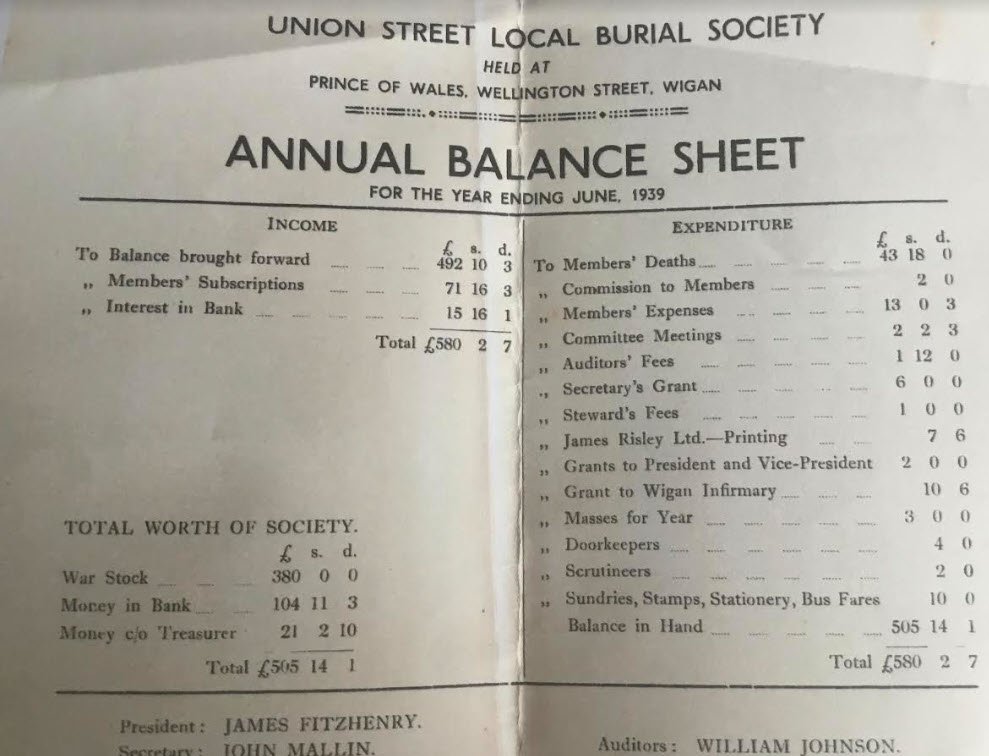 However two  rules  jumps out:-

Rule 13 - That no person will be admitted a member of the society unless whole of his or her family are in good health at the time of his or her entry and such persons  should not be more than 45 years of age ; and should there  appear to be any defraud on an at attempt to conceal any family disorder, such member shown upon due proof thereof  have been excluded.

Rule 28 That no female should be allowed to hold office in this society but any females heads of  of families will be allowed to vote and to address the President the same as any other member of the society. The content of the book is so all encompassing, a Philadelphia Lawyer would struggle to find any loophole. 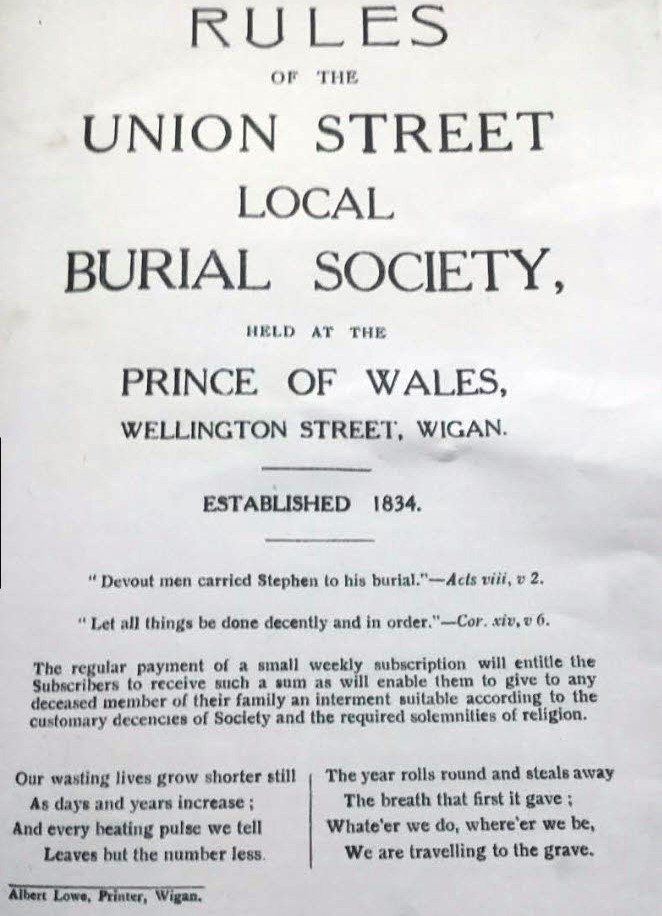 It was vital to enrol new members to replenish the coffers to keep the society financially sound.

Committee member would be expected to recruit new members ( presumably those looking in good health mindful of rule 13 ).  While doing research for this story  I came across the article  on Wigan World regarding The Burial Society that held its meeting at The King William (King Billy) in Platt Bridge ,the piece  reads ---

My parents had their wedding reception there (King William)in March 1945. They were married at St Peter's in Newton le Willows as Mums was living there at the time and Dad was still in the Army. During the evening there was a knock on the door (of the club room where the wedding reception was being held )which heralded a visit by two men asking for Mum by her new married name. She went to door and found they had been sent to ask her if the newly-weds wanted to join the local burial society! After this excitement they had to walk over two miles to spend the night at my grandma's in Abram.

It may be my suspicious mind but I wonder if they got commission for every new member they managed to recruit , just a thought!