Introduction to "The Street That Was" 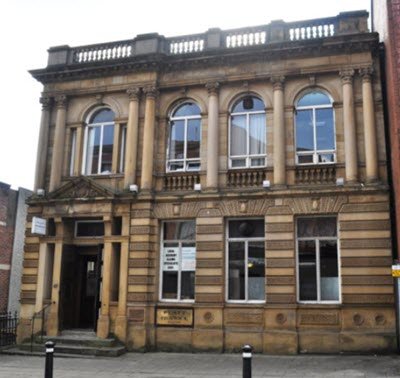 Being made a High Street Heritage Action Zone by Historic England will give the King Street area the recognition, and hopefully the lift it deserves. It is not just about the buildings though; it is about the people who used them, the people who lived in them, worked in them, shopped in them, or had a drink in them.  They are all part of the story.

The history of the buildings associated with the Heritage Action Zone has been divided by "existing" Historic and "long gone" Lost buildings. All the buildings researched have all had a part to play in the history and heritage of the town.

This is the first of a series of stories we will be telling about the buildings in the Heritage Action Zone.  It sets the scene by focusing on three outstanding buildings and some of the people linked with them.

The Street That Was 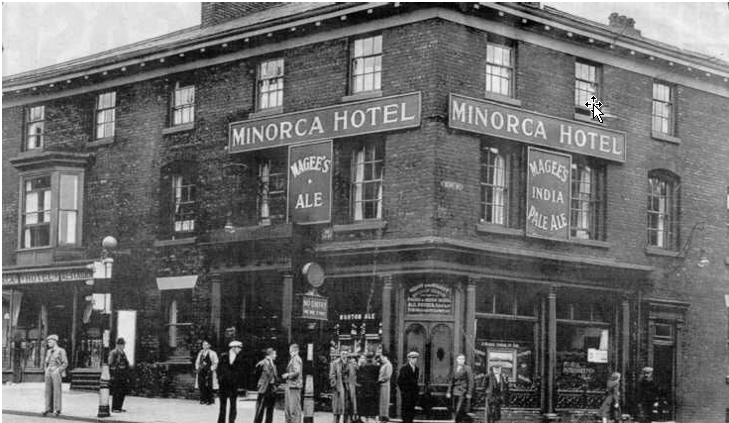 The Minorca Hotel on the corner of King Street and Wallgate

As the 18th century drew to a close Wigan had grown into a sizeable town.  The rapid growth of the Victorian era was yet to come and would be stimulated by the arrival of the railways.  The town centre had evolved as a classic market town in medieval times.  There was a busy marketplace with four main streets radiating from it.  Better-off people had homes and businesses fronting onto these.  A little further back was a network of yards and courts where small industries grew and many lived in much more difficult conditions. As industry and commerce continued to grow plans emerged for a new street.  It would be a prestigious street where people would want to live and work.  One where leading businesses would want to be.  Unlike some of the old streets it would be straight and direct.  It needed a name to reflect its aspirational status.  It would be King Street. Over the next 230 years the street would grow, slowly at first.  It would have good times and some not so good.  People and buildings would come and go.  It would be a place where many memories would be made, and where some would have moments they would prefer to forget. It would become the nerve centre of the town.  Legal and financial businesses would clamour to be there, close to the Town Hall and courts.  There would be shops and a posh arcade, and by the early 1900s it would be the entertainment hub of the town with seven theatres and halls.  The one constant was the pace of change. 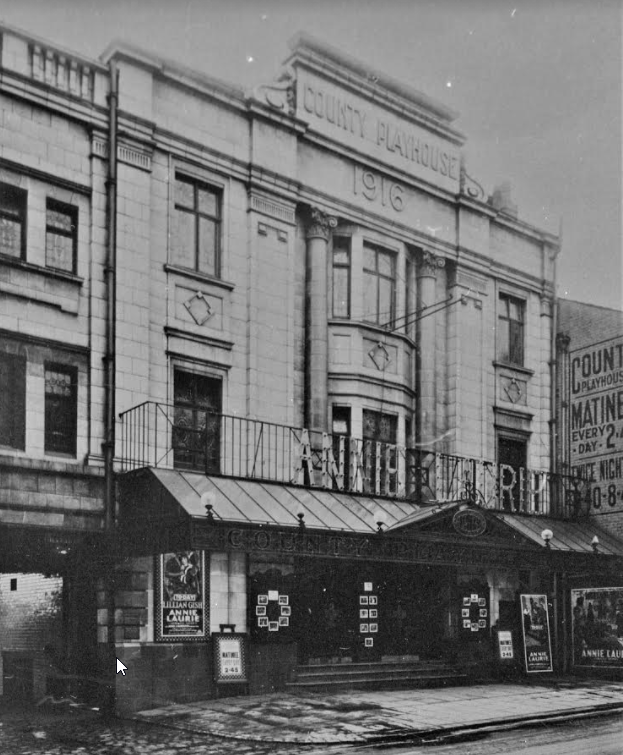 As tastes evolved theatres became cinemas, then bingo halls.  This plethora of large indoor spaces would later provide an ideal opportunity for the street to become a place of bars and nightclubs.  A place for partying. Now King Street and the area around it has been recognised as a High Street Heritage Action Zone.  It is an ideal time to look back at the “street that was” and think about how we care for it in the future.  It has some incredible buildings.  We must work together to keep them safe and find good uses for them.  Let us start by looking back at the rich history of a small selection.  Understanding where they came from will help us appreciate them and encourage people to invest in their future.

Before we start I have to mention Faggy Lane.  Arguably the forerunner of King Street.  When the Corporation commissioned the new street, the deeds included a requirement to “furnish between Wallgate, Chapel Lane and Millgate a better lane than Faggy Lane”. A fragment of it remains today between Queen Street and the railway, hidden behind a car sales showroom.  At one time it connected Chapel Lane with the town centre and ran across Faggy Lane Fields which were later swallowed up by railway lines and sidings.  It was the scene of a fierce battle in 1867 over the right of way between two major rail companies, but that is another story for another day. Where the old lane met the new King Street is still there today.  It is where the walkway across the railway joins King Street next to the old County Playhouse. 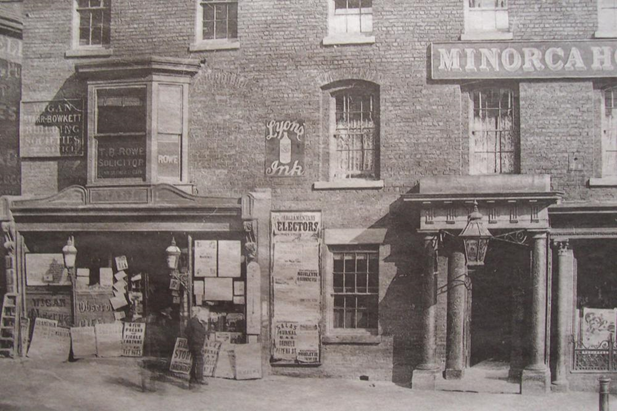 Where a nightingale sang

One building that played a central role in the creation of King Street we know today as The Berkeley, formerly Berkeley Square.  Named after the square in London where the nightingale sang in the well-known song.  It should be pronounced the same as the London square, but it would take a braver person than me to give Wiganers a lesson in pronunciation.     In 1763 there was a farm and malt kiln on the site but by 1791 there was an inn owned by William Roper.  It was William who was the other party to the deed with the Corporation to create King Street. The inn, which was originally known as The Thornton, had a prominent spot on the corner of King Street and Wallgate.  It was rebuilt as a fine Georgian inn around the end of the 1820s.  It retains many of its original features, earning a Grade 2 listing with Historic England.  Alfred Waterhouse, the renowned architect, was responsible for some alterations in 1857 although it is not clear what these were. 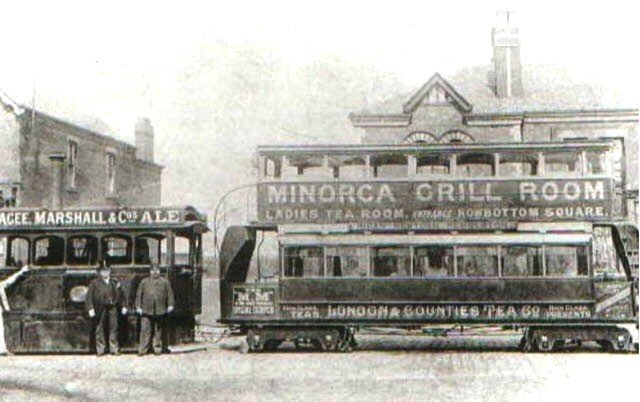 For many decades it was known as The Minorca Hotel.  The origins of the name are not fully understood but it is believed to have been run by a Spanish refugee from the Napoleonic Wars who was a skilled hotelier and may have named it after the Balearic Island he came from. It became a successful business.  The construction of two mainline stations nearby will have helped. 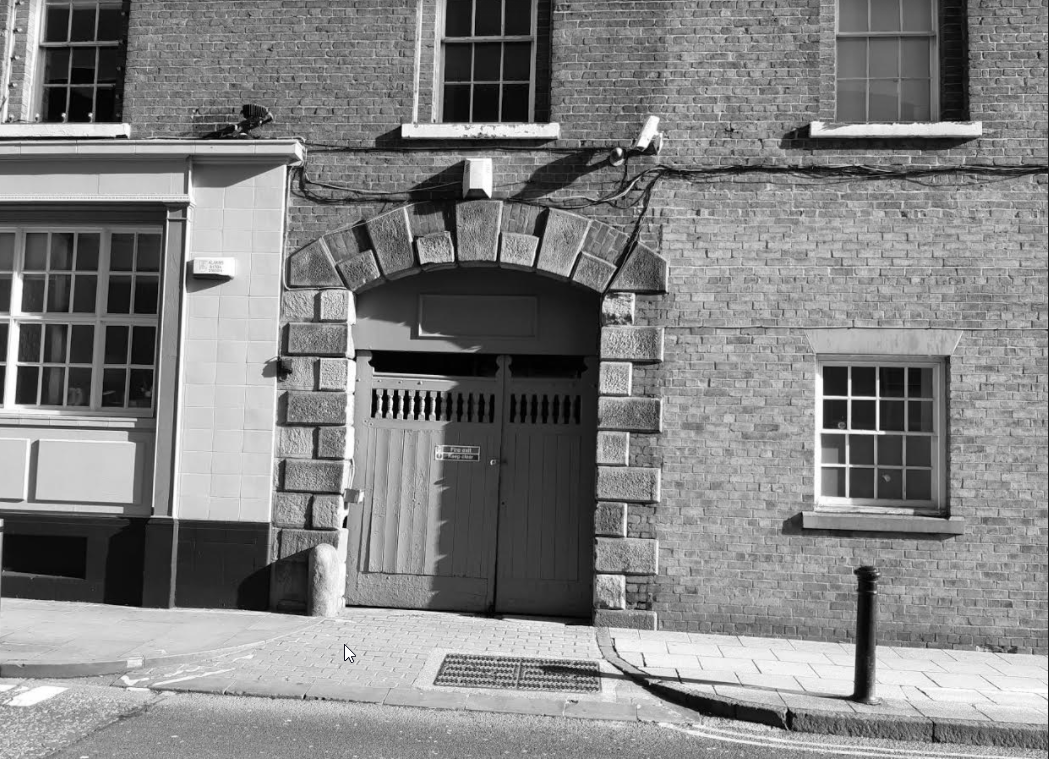 The Entrance to the Minorca stable yard

The stone lined carriage archway leading to the stable yard remains unchanged.  From here the inn provided livery services including the hire of horses and a range of carriages.  Charabancs were run from here as were some of the first omnibus services in the town.  A regular service using a “large commodious omnibus” was running to the Cross Keys in Hindley in 1870. Shop units which were opened on Wallgate and on the corner were put to good use.  The one on the front was occupied by Thomas Wall, printers, stationers, and stamp sellers.  Wall founded the Wigan Observer and District Advertiser in 1853.  He moved into what is now the Observer Building a few yards away in Rowbottom Square.  The shop front became the Minorca Grill Room, a walk-in restaurant.  There was a separate “Ladies’ Tearoom” which was upstairs and had an entrance around the corner in Rowbottom Square which is still there. The corner shop unit was selling tickets for the many nearby theatres at the turn of the 20th century, and later became an off license.  The Minorca was also a good place for meetings.  Many election meetings and a number of inquests were held there.  As King Street became a financial and legal hub some important deals were made there after a glass or two. In the 1970s there was a Berni Inn on the first floor.  The height of sophistication at the time.  The Steak and Chicken Bar menu reveals you could get an 8oz rump steak for 77p.  That included chips, a bread roll and butter, and a choice of ice cream or cheese and biscuits to follow.  You could wash it down with a carafe of Spanish Red for 28p.  Or you could push the boat out and have a bottle of Matheus Rose for what seems like a relatively expensive £1.35. At the back of the Minorca was the Stable Bar in the 1960 and 70s.  Allegedly they were a bit liberal with underage drinking which means a lot of people remember having their first drink there.  By the 1980s the pub became Blair’s then later the Berkeley Square. 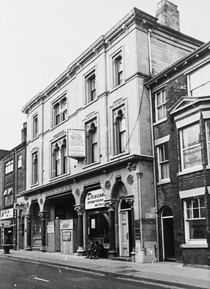 Grime’s Arcade - a passage through time

It took a while for the northeast side of King Street to fill up.  In 1870 one of its most impressive building was completed at number 20 and 22.  The Arcade was built for Richard Leigh the Solicitors, and the Manchester and County Bank.  The monograms of the two organisations are carved in stone roundels above the two entrance doors.  They would occupy the office space whilst there would be room for shops and a splendid arcade on the ground floor.  This led through to what became Arcade Street. The building has an impressive carved stone front with polished pink marble columns.  The arcade has oriel windowed shop fronts with a glass roof to the rear.  There are very solid looking gothic oak doors in the arcade that provide another entrance to the office space above.  There would be other bigger arcades built in Wigan, but this was the first. 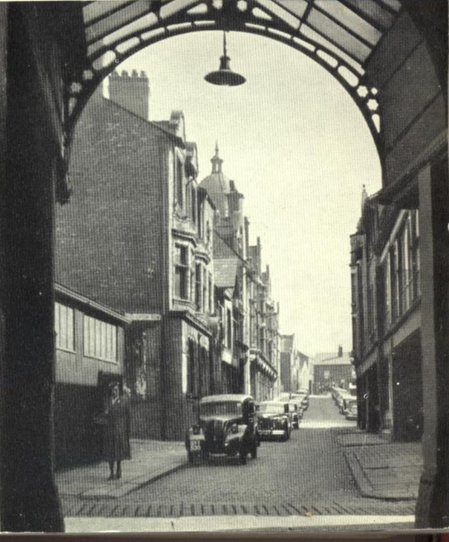 A view through to Arcade Street and Hewlett Street beyond - 1950s

It has always been known as Grime’s Arcade named after the music store that was there from the start.  They sold pianofortes, harmoniums, and organs, as well as a full range of other instruments and sheet music.  Later they would sell gramophones and electrical appliances.  In the 1950s and 60s music shops became exciting places for young people to meet.  They could hear the latest singles in one of 15 listening booths which were in the record store in the basement.  A generation of people bought their first record there and many bought their first record player. In the 1970s Dawson’s music took over when they relocated from Hallgate and remained there until the arcade closed.  Sadly, at the time of writing it has been closed for around twenty years.  However, most of the original features are still intact. In the 1960s and 70s a busy solicitors, Ellis, Sayer, and Henderson, occupied the floors above the arcade.  The offices could be accessed from the front door (number 24) or from a door in the arcade.  They had a large safe with a heavy metal door on the ground floor which I suspect remains there today.

One of the earliest and most beautiful Georgian buildings on the street is the large double fronted town house at number 23. 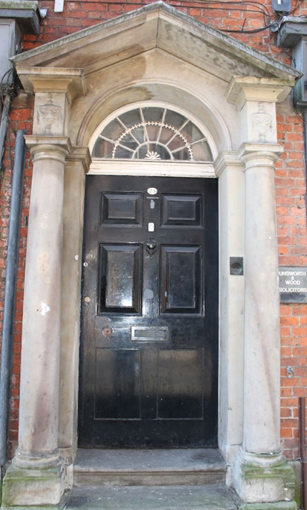 Built around 1800 it was the home and place of work of two generations of the Roocroft family.  They were surgeons and apothecaries.  William Mawdesley Roocroft was born in Standish and trained in Liverpool.  By 1871 he was living in the house with his wife, son William Mitchell, two daughters, an assistant surgeon, and three servants.  He also practiced surgery at the Infirmary.  He was a Justice of the Peace and prominent in Wigan society.  Like many enterprising Victorians he diversified.  He can be found in the local paper endorsing “Patent Airtight Metallic Coffins” which “prevented the release of infection and noxious gases from decomposition”.  He was also a director of a number of Wigan companies. He was first on the scene of a disaster in 1884.  The LNWR were widening the railway near Wigan.  As a bridge was being demolished it collapsed killing the railway inspector and six men.  He helped recover the dead and treat the many who were seriously injured. By 1891 William junior had joined the practice.  As well as serving the town he served his country as a Surgeon Colonel in the volunteer battalion of the Manchester Regiment.  At the age of 56 he was serving at Flanders on the Western Front.  He was awarded a CMG in the 1918 Honours List.  Shortly after he resigned his commission due to ill health but remained an honorary colonel.  He later retired to Southport where he died in 1943.  The house had a number of other occupants including the Hulton Colliery Company and in the 1960s it housed an optician.

So much history in just three buildings. King Street and the area between it and Library Street has 10 listed buildings and many more historic and architectural gems, each with a story to tell.   Go there in the daytime and have a good look around.  Stop and look up.  It is still worth its regal title.  It is still our King Street.