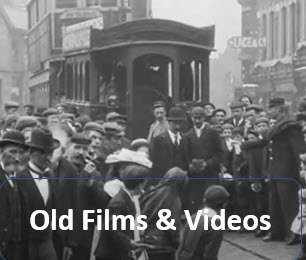 Lots of films of Wigan, also acknowledgment to the BFI for these wonderful windows on old Wigan Life.

People wave, cheer and laugh at the camera as a tram worker playfully tries to clear them out of the way by spraying them with water. As the camera pans to follow the tram disappearing down the hill, it passes over women in shawls, men smoking, and a little girl in a bonnet being held aloft.

The tram network - closed in the 1930s - ran to Wigan Pier. By 1902, the Wigan Corporation had taken full control of the town's tram network, and had begun a programme of electrification.

Mitchell and Kenyon's 'factory gate' films typically feature large crowds, but the workforce at Rylands & Sons - Gidlow Mill factory is relatively sparse. Most are women, many in shawls and straw hats, suggesting that this was a textile mill. One woman, caught eating with her mouth open, seems embarrassed and swiftly runs off. At the end, several young women peer closely at the camera as if scrutinising us.

Some particularly deft camera positioning gives this film of Wigan's coronation procession an extra charge. The procession approaches the audience head-on - before turning off just in front of the camera. It's a striking effect, reminiscent of French film pioneers the Lumière Brothers who, so legend has it, had naïve audiences straining to get out of the way of an oncoming train.

These smartly-dressed employees with their bowler hats and pocket watches are far from typical subjects for a 'factory gate' film. They tell us that the work was probably clerical or managerial, but although we know the film was shot in August 1902, so far we're left guessing what the company was. The leaflets being handed out advertise a film screening at Wigan Public Hall a few days later.

A damp, overcast Autumn day made life difficult for Mitchell and Kenyon's camera, and with poor focus, too, it's hard for us to read the expressions of these workers from Walker Bros, a mining and general engineering company. On cue from the cameraman, the first group of men rush forwards as if in a race, followed at a more leisurely pace by their workmates, many carrying lunch boxes and flasks.

A rich assortment of transport is on display in this busy Edwardian street, including a hand-pushed cart, elegant horses pulling dainty two-wheel carriages and a much more workaday cart carrying a live cow - not forgetting the imposing steam-powered trams. There's a striking absence of women, though a handful of girls linger among the groups of lads on the look-out for excitement.

Before the introduction of a national fire service in 1938, Wigan, like hundreds of towns and cities across the land, had its own municipal fire service. 'Turn-outs' were staged events to demonstrate to the local populace the swiftness of their brigade. In the early 1900s the steam-powered appliances seen here were gradually being replaced by internal combustion engines.

This film seems to have been taken at a Wigan versus Hull FC fixture at The Boulevard stadium in Hull, probably at the beginning of the 1902-03 season - either on the 4th or the 11th of October. The misty autumn afternoon's rugby drew a huge crowd, many of whom would have flocked to the ticketed presentation of the film in the coming days.

Unlike some other sports films in the Mitchell and Kenyon collection, these scenes emphasise the players more than the crowds. We see the teams walking onto the pitch, some unusually close shots of match action and a brief respite for the players pitch-side. Commissioned by Edisonograph, the film was shown to a packed house at Wigan Public Hall two days later. The final score was Hull 8 Wigan 0.

Attending trotting matches - in which horses in harness race at specific gaits - was a popular Edwardian pastime. We see the highlight of the day: a race in which the favourite, Wig Wag, is pipped to the post by General White thanks to the superior handling skills of his driver, George Wiltshire. For the benefit of the audience a showman holds up a 'winner' sign next to the victorious steed.

Sheffield Wednesday (in the lighter stripes) were flying high in the First Division when they visited lowly Wigan Borough F.C. in the FA Cup third round. The teams are greeted by a record crowd and Wednesday's boy mascot - who looks a bit lost - at the hastily-extended Springfield Park. Although no goals are seen, Topical Budget's newsreel cameraman captures the frenetic pace of play and the pressure on Wednesday's keeper. The home team put up a great fight, but Wednesday's superior skill won the day, 3-1.

Notable for the miserable weather and gallons of mud - impressive even by Glastonbury standards - the Bickershaw Festival was also notable for its quality line-up. Acts such as The Grateful Dead, Captain Beefheart, Hawkwind and The Kinks were a great attraction, and filmmaker Frank Rigby records how thousands of music fans turned up in a field in Wigan for an experience it would be hard to forget.

Filmed by Keystone in 1911 for the LNWR ( London & North Western Railway ) who had their own full time film unit. The film was produced to feature both a typical Lancashire colliery served by the LNWR and also the women surface workers or Pit Brow Lasses who had been in the news after moves to legislate against their empoyment on the surface at collieries. More women surface workers were employed at Lancashire collieries than in any other coalfield.

Extract of Walking Through History - Series 3 Episode 1 -The Way to Wigan Pier with Tony Robinson .  The film covers from Parbold to Wigan & Kirkless (Wigan Coal & Iron)

BBC HomeGround  Film -  presented by Brian Redhead, some good footage of Wigan in 1979

Brief History of the cinema

Some great footage of the Wigan Flight of canal locks, Quuens Hall and Parish Church

An excellent investigation and history of this scheduled monument.

The Origins & History of Wigan