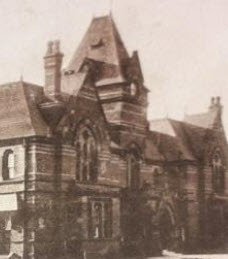 On his death in 1851 he bequeathed his portfolio of shares to the sisters, this would provide a large annual income and provide the opportunity to donate to charitable institutions, etc

They subsequently moved to Arley Hall along with one of their brothers. However, for some "unknown" reason Margaret and Amelia moved out of the Wigan area and set up home together in Lyme Regis.

The main charitable donations by the sisters amounted to over £6,000 to building and redocoration of Christ Church, Ince (Ince Parish Church), regular donations to the Wigan Dispensary, the forerunner to the Wigan Hospital (Royal Albert Edward Infirmary). In addition to donations of approx £44,000 to RAEI.

The hospital retained the name of The Royal Albert Edward Infirmary and Dispensary right up until the creation of the NHS in 1948 after which the word “Dispensary” was dropped.

The idea of a hospital in Wigan was mooted as far back as the 1830's. In 1866 the idea gained substantial interest and a committee was formed  chaired by John Lancaster along with Nathaniel Eckersley and various leading businessman in the town.

The letter below was to kick-start the initiative that eventually led to the opening of the Hospital in 1873.

Following the meeting where the Gidlow sisters letter was read out there were promises of donations totalling £15,000 which amounted to half of the projected total costs of £30,000. 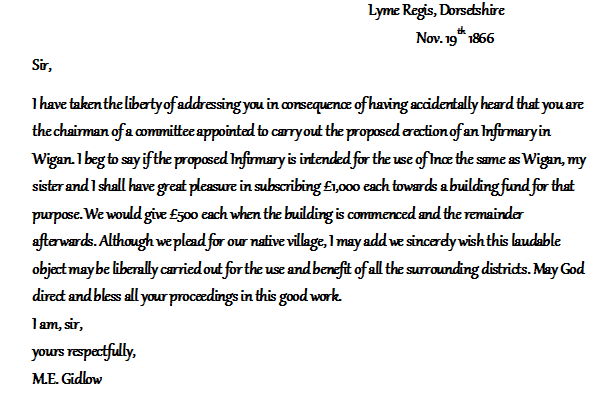 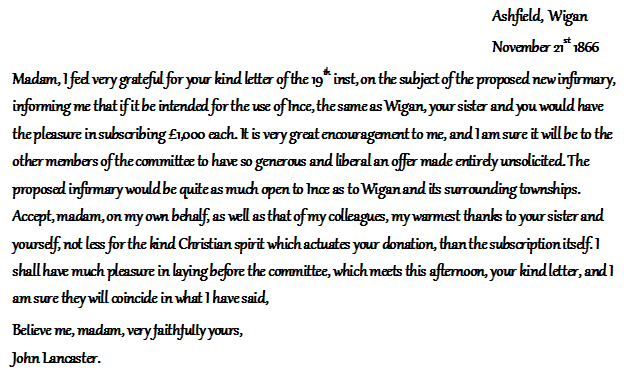 In 1885 Amelia Gidlow donated £6,000 to build the Gidlow Wing extension in memory of sister Margaret Eleanor. 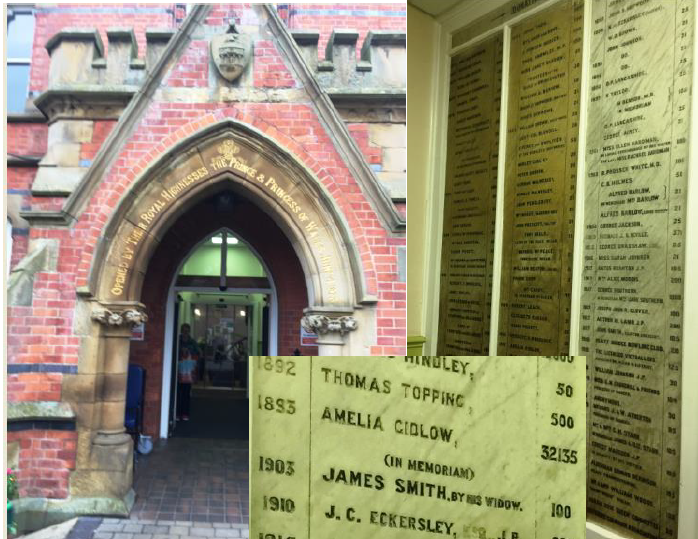 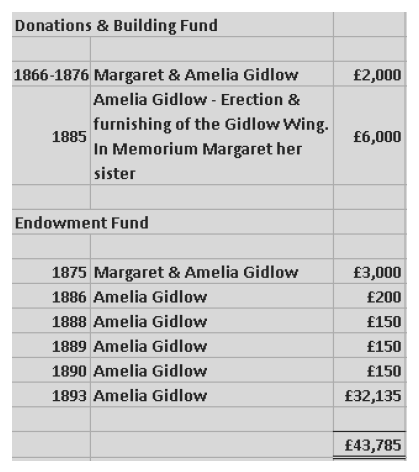 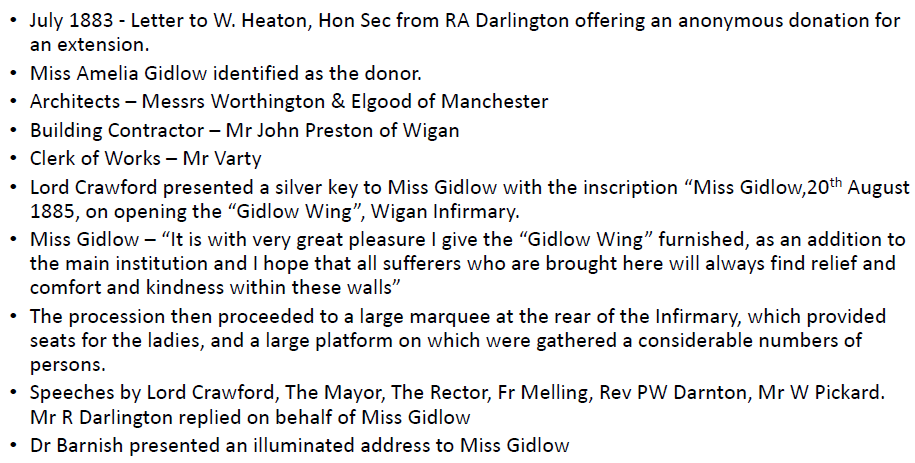 The Gidlow Sisters, originally from Ince, donated over £43,000 to the Infirmary in the mid to late 19th century, worth several million pounds in today's money.

In August 1885 The Gidlow Wing was opened as a memorium to Amelia's sister, Margaret Eleanor, fully financed by Amelia.

In gratitued of this munificent gift, a stained glass window was commissioned and oil paintings acquired The paintings adorned the walls of the Infirmary Boardroom.

Initial enquires with Wigan, Wrightington & Leigh NHS to locate the above have so far proved fruitless.

In addition the current map of the Infirmary there is no reference to the name of Gidlow. 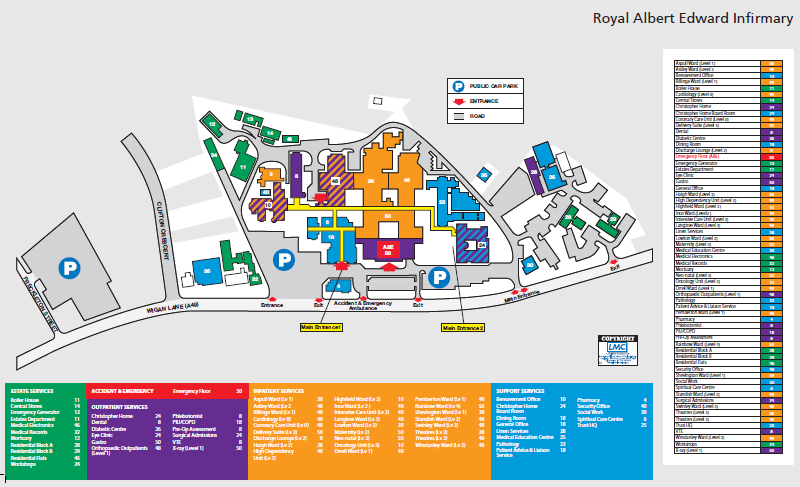 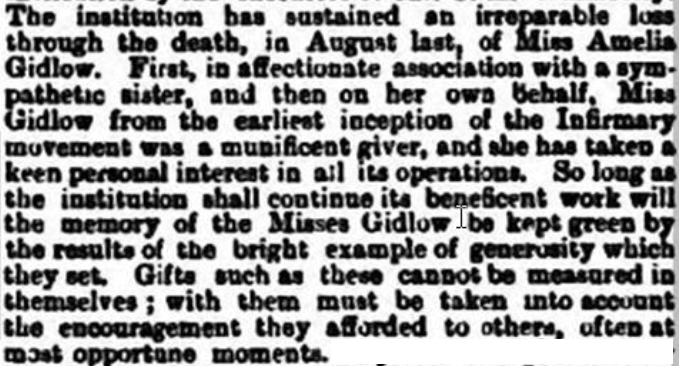 Various  Society members have assisted in providing the "sensory" images for the new Community Assessment Unit at Wigan Infirmary.

We are also deighted that the name of "Gidlow" has been resurrected by the naming of the Gidlow Lounge.

The Gidlow Sisters, Amelia and Margaret Eleanor, originally from Ince, donated in excess of £40,000 during the 19th century. 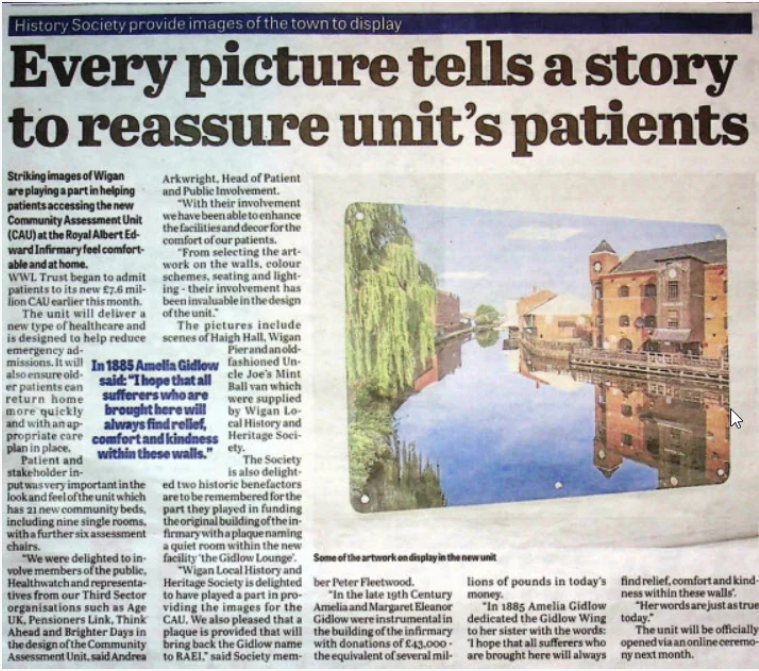 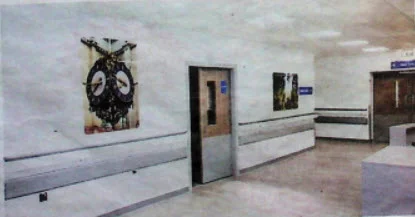 At the opening of the Gidlow Wing in 1885 Amelia Gidlow said "I hope that all sufferers who are brought here will find relief, comfort and kindness within these walls.

In addition, portraits of the sisters were hung in the Board Room and a stained glass window was installed.

The Society continue their search to find these historical pieces.

All lines of enquiry to discover the whereabouts of these  paintings has now been exhausted and the Society have reluctantly come to the conclusion that the paintings may have almost certainly been lost at best and destroyed at worst.

If anyone has further information please e-mail peter.fleetwood19@gmail.com