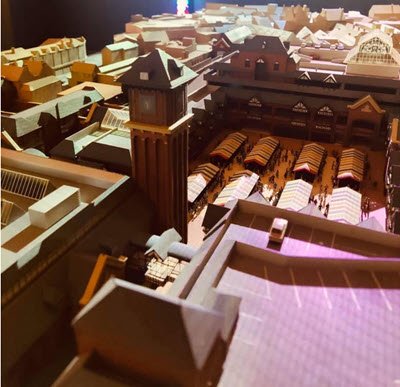 On the 21st of May 2021 Wigan Local History and Heritage Society broke the news to the local community via social media that a pre-planning consultation for the redevelopment of the town centre had been launched by Developers under the name of Galleries25.

The majority of residents had no idea of the detail of the plans and it came as a huge shock to many. The response was immediate and like a shockwave the news travelled with the post reaching almost 32,000 people. It was shared 77 times and gathered 263 comments.

Members of WLHHS and the community expressed their shock at the proposals to demolish 8 acres of the town centre including the award winning existing red brick buildings of the Galleries, the Market and the iconic Clock Tower.

It was generally felt that they were very much in keeping with the character of the town and the Wigan area, still in very good condition and that the existing market hall should be developed, instead of demolished and moved.

The need for another cinema and a bowling alley was also questioned, as we already have these, then the plan to include them would just put the others out of business.

There were also other questions for Wigan Council:

Is there really a need for another hotel in the town?

Will people really choose this as a retirement place to live?

The general consensus was that the modern designs were more in keeping with a large city centre and totally out of character in an ancient, traditional market town such as Wigan.

It was accepted that some of the buildings did need to be repurposed but that this could be done without a complete new build. Demolishing the existing buildings would dramatically change the townscape in order to achieve it.

People wanted to see an alternative plan showing how the existing buildings could be retained through adaptive repurposing and enhancing.

They wanted to see the different options side by side so they could assess the merits of each proposal to help to make a meaningful decision.

The Consultation period was very short and closed on June 1st, 2020

Here is the Society’s written response to the planning application:

Following an invitation to meet with the Developers and being formally listed as a Consultee, Wigan Local History and Heritage Society wishes to submit the following comment on the Galleries redevelopment plans A/21/91796/MAJES.

The comment reflects and includes the views of the wider membership of its104 Wigan Local History and Heritage Society members.

Wigan Local History and Heritage Society wishes to thank the Developers and Wigan Council for the opportunity to take part in the consultation process regarding the redevelopment of Wigan Town Centre.

After careful consideration, the Society and it’s members wish to object to the current proposals to demolish a large part of The Galleries site to be replaced by new builds.

It is strongly felt that the heritage appraisal does not provide adequate assessment of the significance of the heritage assets, the bordering Conservation Areas and the important contribution the Galleries complex makes to these.

In fact, the appraisal dismisses it as being of no importance, focusing only on its walls in Market Street and in Mesnes Street.

We agree that the town centre must diversify, but the new proposals do not reflect Wigan’s distinctive character, contrary to the requirements EV3a of the UDP.

It has become increasingly obvious to the Society that the Galleries complex is of local importance to the community, and it contributes positively to the setting and character of the Town Centre.

The positive contribution was ensured when the town planners in 1984 held a competition to find a preferred architect who would come up with a winning design for the Galleries complex.

This was commissioned and funded by the Miners Pension Fund and the designs were made up into a scale model, so they could be seen in context with the surrounding buildings by the Local community.

We feel that this should also have happened with the current planning application, so the true scale of the proposed development would be clear for all to see.

The winning architects for the Galleries complex clearly understood and respected the rich history and heritage of Wigan in creating a design which blends sensitively to the unique setting of the old street patterns and heritage buildings in Wigan Town Centre.

They emphasised continuity with the past by replicating the facade of the old Victorian Market Hall, as you can clearly see when you compare photographs of the two buildings.

Redevelopment came to Wigan much later than in other local towns and so Wigan was in a fortunate position to be able to learn from the mistakes made by the others in the 1960s, who had chosen redevelopment schemes which paid very little regard to the character of their existing towns.

In the Galleries they wanted a traditional design, built in traditional materials of red brick and slate that would sympathetically reflect a lot of the features of Wigan Town Centre like the arcades and some of the black and white, mock Tudor features.

Wigan Council wanted to preserve the heritage features of the town and for it to be very much in the character of Wigan and one which would stand the test of time, one that the people of Wigan would be proud of, and was expected to last for many years longer than thirty years.

In contrast to the Galleries the design of the buildings in the redevelopment plans bears no relation to the character and setting of the adjoining conservation areas. They could almost be oﬀ the shelf designs that will become quickly outdated, tired and dirty looking in no time, and indeed could be  of any town in the UK, unlike the Galleries design, which is unique to Wigan.

The Galleries is a shining example of an award winning, sensitively designed, retail complex of its time.

No other town can boast anything quite like it. It was designed especially for Wigan, and the Society, along with its members, considers it to be a future heritage asset.

Just over 30 years later there is no justification to demolish it, instead it can be repurposed, along with other currently empty heritage buildings within the town centre to accommodate all the things the proposals are saying we need in which to regenerate the town, this is in line with the Town Centre Conservation Area Appraisal Paragraphs 2.1.1 and NPPF 126 and NPPF 32.

In fact, this is what the Society and its members had been led to believe was to happen all along and the plans to demolish most of the Galleries complex came as a great shock to many people in the town, indicating inadequate consultation on preserving the heritage of Wigan, contrary to NPPF 126 where it clearly states that a planning application should be acceptable to local communities and stakeholders through eﬀective engagement.

Demolition will create a significant adverse impact on the townscape.

The planned replacement buildings are too large, too high and dominant and will adversely impact on the setting of the listed buildings within the adjoining Conservation Areas, on the current low- rise layout of buildings, and on the skyline, contrary to the NPPF paragraph 11dii.

The proposals will not achieve sustainable development in line with NPPF paragraph 7 or protect and enhance the environment, nor will they use resources prudently or minimise waste and pollution as required by paragraph 8c.

With the introduction of remote materials and built forms and the removal of iconic landmarks such as the market clock tower, this will seriously impact on Wigan's sense of place, and its distinctive character, contrary to NPPF paragraph 86a.

The proposed level of demolition is not acceptable to the Society and it’s members.

We believe instead that adaptive reuse of some of the existing elements, such as the clock tower, the Galleries walkways, the Market Hall and canopy and the two entrances on Standishgate is a far better solution.

Selective, much smaller scale demolition to improve connectivity and adaptive reuse of the existing structures is more acceptable, allowing the town centre to evolve, in line with NPPF paragraph126.

The Galleries was never built as a short-term addition. It is more than capable of adaptation to meet new needs in line with NPPF paragraph 130a.

The design of the residential blocks and hotel do not integrate well with the existing urban fabric, contrary to NPPF paragraph 130c and the Local Plan Core Strategy CP10.

Other buildings within the Town Centre, such as the currently unused Civic Centre and the Police Station, now successfully repurposed as a Premier Inn, look very similar in design to the proposed hotel. Adaptations to the Civic Centre like the ones to the old police station building could indeed provide better solutions.

The whole of the Town Centre needs to be looked at and considered, in line with NPPF paragraph 152, which encourages adaptive reuse of existing buildings.

Demolition on such a large scale will contribute to climate change. Key characteristics will not be preserved and with a shortened lifespan of just 30 years the Galleries won't serve future generations as planned.

Immense amounts of CO2 emissions, caused by mass demolition and new build construction, could be saved if more buildings are reused.

We are concerned that the proposed plans for the considerably smaller market will result in this becoming a market in name only and not a traditional market in its truest sense, which Wigan has enjoyed since the middle of the thirteenth century.

We are concerned at the loss of a traditional outdoor market and strongly believe that if the revival of the current market is managed well it will add considerably to the regeneration of the town centre. Other local towns such as Chorley, Altrincham, Bury, Southport and Preston successfully use their markets as an important asset to attract footfall into the town and Wigan must do the same.

We object to the planning application presented as a hybrid application as this goes against the Wigan Town Centre Conservation Area Appraisal 2.32 which specifically requires in line with PPG 15 that Wigan Council will not accept any outline applications for proposals within a Conservation Area and that these should be submitted in full showing the size of the development in context, and as the Galleries site adjoins the conservation areas and will impact enormously on these, then this rule should still apply.

It is for all these reasons that Wigan Local History and Heritage Society strongly objects to the planning proposals as they currently stand.

The plans did not appear to have taken into account any of the comments made during the short consultation period and a hybrid planning application was duly submitted via the Wigan Council planning portal in June.

Despite a petition signed by more than 5000 people asking for a halt to the planning application so that meaningful consultation could take place and almost 1000 written objections were submitted, the redevelopment plans were accepted with conditions at the planning committee meeting which took place on November 2nd 2021.

Demolition is due to start in early February 2022.

WLHHS will send a letter to Wigan Council to inform them that they wish to be considered as stakeholders and be actively involved in the process of decision making regarding the re-siting of the heritage assets which will be removed from the site.