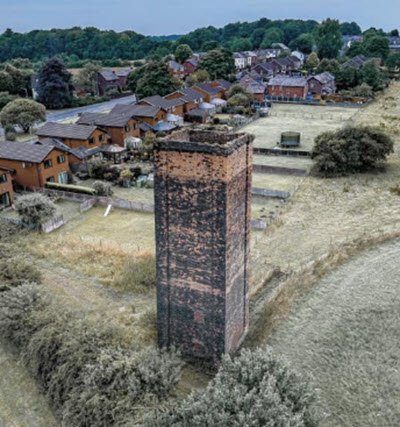 A now silent and brooding presence, Wall Hey chimney bears witness to Haigh and Aspull, its past and its people, and still speaks eloquently of those dark industrial days…Once it stood sentinel over an industrial landscape choked with smoke and scarred by man’s insatiable pursuit of Wigan’s ‘black gold’ – coal!

A symbol of hope, it offered a lifegiving breath of clean air to the men, women and children toiling in the dusty, subterranean blackness of the mines.

Now, almost two centuries on, it still stands, a landmark, the only survivor of these dark days in the green and pleasant landscapes of Haigh and Aspull. Orthogonal obelisk, this monument to endeavour and sacrifice has been weakened by relentless onslaughts of time and the bitter winds and battering rain that sweep down from the moors.

Without help, it too will one day disappear, and with it, the last reminder of these by-gone days of steam and iron and a community with mining at its heart.

But, all is not lost, the crumbling chimney has friends and they have determined to save it and celebrate it as a living symbol of the spirit that still unites our community, a symbol of life and courage and hope that is needed now more than ever.

The exact date of when the pit was opened is not certain. It could have been as early as 1834, but is was certainly in operation in 1842.

It was one of several sunk by the Earl of Balcarres, the then resident of Haigh Hall. It was originally sunk to a depth of 331ft to mine the highly prized cannel coal and was subsequently deepened to 388ft to access the King Coal seam and eventually to 645ft to mine the Yard Seam.

Drainage from Meadow Pit and Heath Field Pit passed through Wall Hey Pit, on to Crawford Pit and eventually to the Great Haigh Sough and Yellow Brook.

Wall Hey ceased as a working pit in around 1871. At this time it was repurposed as an up-cast ventilation shaft. A furnace was constructed at the base of the shaft and the chimney you can see today was built to draw dangerous gasses (fire damp and black damp) from the surrounding mines. This form of ventilation was soon superseded by ventilation fans and by the early 1900s the Wall Hey ventilation shaft was no longer in use.

In 1967 it was sold by the Coal Authority to Thomas Witter and Company. Historic England recognised the importance of the air shaft as a significant piece of mining heritage in 1978 and recorded Wall Hey as a Grade II listed building.

However, it is now beginning to show signs of decay and without remedial action soon we may lose this rare and rather special memory of the local mining community.

On Monday 17th January 2022 a group of enthusiastic locals, including Councillor Ron Conway, gathered in the Balcarres Arms, Haigh, and set up a Friends of Wall Hey group.

Lesley Price was voted in as Chair and a constitution was agreed and signed. Our intention is to recognise the importance of Wall Hey as a rare and authentic reminder of the mining heritage of Haigh, Aspull and District and see it as a memorial to the many lives lost and hardships undertaken by the local community, many of whose families still live in the village today.

We hope also to find funding to save Wall Hey from further decay.