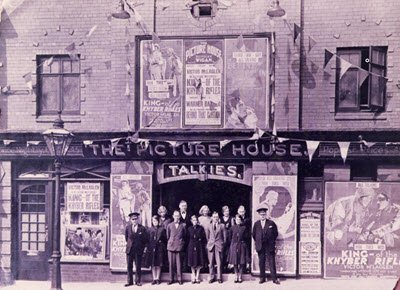 A palace of entertainment 1950s.

plus a "referendum in Wigan"

Please don't think me pedantic but the vast majority of people( including me) thought it was called 'The Scholes ' only when looking at advertisements for this article did I realise the correct name ,unimportant I know but a good talking point for older readers. However whatever the name it was  visited by yours truly every Saturday afternoon , the cost of entrance was 3d front seats (wooden) 4d back stalls  with plush red velvet seats, the vast majority  of children opted for the cheaper seats ,don't forget the penny saved would have bought an ice lolly from Telford's sweet shop in nearby Wellington Street.

After the performance  if, as invariably was the case, the the film had been a "Cowboy" , the lads would ride imaginary horses , reins  in one hand whilst slapping their hips with the other to make the unfortunate steed  go faster ,until reaching the aforementioned Telford's when with  both hands on the reins  quick yank on the bridle  to bring your mount to a halt .Then into  the shop to spend the penny saved by enduring wooden seats and a crick in your neck from looking up at the screen ,all the privations of the front stalls seemed worth it to have this extra spending power!

On the subject of "Cowboy" films, strange that in a barroom brawls with fists flaying and chairs flying the "goodie" never lost his white stetson ,the "baddie" by the way, always wore a black one, which were the signals of  when to cheer or  boo, which children did with great gusto .

Edna the commandant, (usherette) in charge of the front stalls would reprimand  any child who became to exuberant  "th owd mon in park can hear thee" (Sir Frances Sharp Powell's statue) she'd bellow.   Now you knew never to cross Edna ,she was judge and jury and had the power have you evicted without the right of appeal, if you even thought of disobeying her.  A fate I never experienced. Although  I was on a final warning  couple of times. Incidentally, the one with the white hat and neckerchief always won.

Another favourite was the 'follow-up' at the end of the performance, often" Flash Gordon" I don't mind telling you I had many a sleepless night thanks to "The Clay Men " creatures that manifested them selves  from the walls , in the earlier hours looking up the bedroom  ceiling, with its uneven surface, I convinced myself that the monsters had decided to pay a visit to 48 Mc Cormick Street . I think the only time I be been more frightened was listing to  the play" The Monkeys Paw" on the wireless . My Mam realising what effect Flash Gordon and Ming the Merciless was having on my mental wellbeing said I should leave the "pictures" before the serial started . Not a chance , leave without my horse !

The "pictures" was also a great source of entertainment for the older generation too, don't forget televisions were as rare as hens teeth, it  seemed that more women  than men were "picture goers" , as mentioned earlier the majority of men preferred the charms of the many watering holes that adorned Scholes in the 1950s . In the evening there was 2 performances ,"The First and Second House" the film changed 3 times each week The venue never opened on  Sundays . In the time when  very few had televisions , 'The Pictures'  seemed the ultimate luxury,  many local residents. would visit " The Scowes" on each change of programme irrespective of the  genre - Westerns, Musicals, War, all were magical especially if they were in Technicolor.  I remember women saying it was a good picture it was a "skriker" (a very sad film for our southern cousins).I pondered as a child why anybody would enjoy seeing something that would make them cry  .

It was only seldom you would see the sign "FULL HOUSE" displayed on the pavement outside the main entrance. There were exceptions ,the area  had a large second and third generation of Irish decedent and subsequently a large number of Roman Catholics so the management could be sure to put "bottoms on seats" if the film had any sort of Irish or Catholic theme, the most notable was when  " The Quite Man " made what seemed a fairly regular reappearance. Even " the men" would make an effort to see that film , usually the" First House" allowing time to call for a pint at their favourite local;  the pubs would welcome the "pictures loosening" as they would be sure  to see an increase in trade, the women would make their way home and the men would be heard to say  " I'll just call for one (or three)".  Another blockbuster was " The Song of Bernadette" a film about Lourdes and the miracles attributed to that place. The Robe and other ' pictures ' with a biblical theme would also find a ready audience. Sadly the final curtain came down for The Picture House in February 1959 the same day The Regal , Lower Ince meet the same fate.

I can remember vividly as a child  going with my Mam to see a film about Ester Costello ,another favourite of the community as its set in Ireland. The only seats available were 'upstairs' . It was at the time when most people smoked,(The highest recorded level of smoking among men in Great Britain was 82% in 1948,  41% of women)  it was almost impossible to see the screen as the smoke rose to the top of the auditorium .  The Picture House ,Scholes, in common with other smaller picture houses had poor ventilation ,the  dialogue was equally difficult as everyone was coughing their heads off. The only chance to escape the smoke was when the ice cream usherette sold her wares on the ground floor ,the atmosphere on that level seemed almost pristine in comparison to the " Gods". I use to think that it was a swindle, the tubs of ice cream with a little wooded spatula  had false bottoms, the alternative an ice lolly which  would melt long before you got to the stick; juice running down your wrist and under your jumper , yuk !   On the particular evening in question  I recall my Mam saying to a neighbour that we  were like a pair of kippers .It only dawned me what she meant weeks later on holiday in the Isle of Man I saw notices all over the island  about smoked kippers !

In the 1950s there were well over 20 pictures houses in Wigan and district .I thought readers may  be interested , and the names will no doubt  bring back happy memories  ....

WIGAN  itself  -The Palace , The County. The Court , The Pavilion, The Princess, The Empire , The Ritz. The Picture House , The Labour . Gidlow Picture House . HINDLEY - The Palace , The Castle,  The Rex. . LOWER INCE - The Regal . HIGHER INCE - The Doric . PLATT BRIDGE  -The Miners Hall. The Palace. ORRELL- The Majestic. UP HOLLAND - The Lyric . PEMBERTON - The Carlton,  The Queens. ASHTON - The Queens , The Palace , The Scala .STANDISH - The Palace I'm sure I will have missed a few. Others, people will remember with fondness  that had closed by 1950 -The Wallgate also known as The Royal  . The Canada , closed 1945  3 years later opened as one of Wigan's ' Crown Jewels' - The Little Theatre , the first performance ' She Stoops to Conquer.

The first first building to be used purely for showing films  was New Central Hall , King Street among much fanfare on March 22nd 1909 Wiganers had the opportunity to see a major attraction with the screening of the World Heavyweight Boxing Championship bout between Jack Johnson and Tommy Burns which  took place on Boxing Day 1908. Imagine the excitement in Wigan,  the vast majority would never have seen a moving film let alone a World Championship. The venue was updated with tip up seats and other improvements,  and reopened in 1910 alas with increasing competition form such as The Pavilion it became unstable and closed its doors in 1914.

Whist doing research for this article I found some interesting facts about Wigan's picture houses  one in particular caught my eye was  regarding the The Pavilion; The building  was open opened as The Coliseum Skating Rink, it became a cinema in 1910 and was renamed . Seating for 5000 probably on long wooden benches, with standing room for a further 2000 , when you consider the population of Wigan was approximately 64000 . Amazingly  it could accommodate 10% of the population !

Regular cinema tip-up seats were later installed and the seating capacity was reduced to 2,000.  In 1930, a Western Electric sound system was installed. The Jardin organ was removed from the building sometime during the 1930’s., probably as more ' talkies ' became available ..  The first feature film originally presented as a talkie was The Jazz Singer, released in October 1927.

The Pavilion Cinema was closed in 1957, and was demolished to build the towns' swimming baths, known as Wigan International Swimming Pool.

Another amazing fact came to light whilst researching this subject , something I had never heard of before and I think only a few in  Wigan will remember or have heard of -  Wigan held a referendum on whether cinemas could hold performances on Sunday . The plebiscite was held on 28th January 1948 . 60,000 were eligible to vote the result was  - FOR 13,326   AGAINST 8,695. A turnout of 37% a remarkable figure when you take into account it was held in the middle of winter, polling stations opened at 12 o'clock and closed at 8 o'clock which gave anyone working only a small window in which to register their vote. By comparison, in the 25 seats contested in the 2019 local elections the average turn out was 25.90 . Only Lowton East came near to the referendum turnout with a figure of 36.1. In that poll the electors had an extra 8 hours in which to vote and had the opportunity to vote by post a concession not available to the electors in referendum.

Following the ' Aye Vote ' each cinema had to apply for a licence individually,  8 did, all were granted with quite strict conditions.

Brian Murphy 'THE PLEASURE PALACE' ( A History of Wigan Cinemas )1999.